18 June 2012
Warning of crimes against humanity and possible war crimes being committed, the United Nations human rights chief today called on the international community to overcome differences in order to end the violence and human rights violations in Syria.

“All violations of the human rights of the Syrian people at the hands of all parties to the conflict must end. The Government of Syria should immediately cease the use of heavy armaments and shelling of populated areas, as such actions amount to crimes against humanity and possible war crimes,” the UN High Commissioner for Human Rights, Navi Pillay, said in her opening statement to the 20th session of the Geneva-based Human Rights Council.

“I also urge the international community to overcome divisions and work to end the violence and human rights violations to which the people of Syria have been subjected,” she added, noting that efforts must be made to ensure accountability for all perpetrators, including those who have attacked UN observers on the ground there.

Over the weekend, the UN Supervision Mission in Syria (UNSMIS) announced that it had suspended the monitoring activities of its observers due to the intensification of armed violence across the country in recent days.

“This suspension comes while innocent civilians are being killed every day, but the situation is posing also significant risk to UN observers who are now locked down and not patrolling,” Ms. Pillay said. “This follows daily attacks on their convoys seeking to access towns and villages in Syria, including the town of al Haffa on 12 June, to document grave human rights violations.”

The Security Council established UNSMIS in April to monitor the cessation of violence in Syria, as well as monitor and support the full implementation of a six-point peace plan put forward by the Joint Special Envoy of the United Nations and the Arab League for the Syrian Crisis, Kofi Annan. Amongst other things, the plan calls for an end to violence and the start of inclusive political dialogue.

“The situation in Syria continues to deteriorate, and the suffering of civilians has increased significantly,” Ms. Pillay said in her Council statement, which also provided a wrap-up of her Office’s activities.

Regarding the upcoming UN Conference on Sustainable Development (Rio+20), Ms. Pillay reiterated her appeal to Member States to integrate key human rights considerations into the Rio+20 outcome document, to ensure full coherence between efforts to advance the green economy, and their human rights obligations, including the right to development.

“They [Member States] should recognize that all policies and measures adopted to advance sustainable development must be firmly grounded in, and respectful of, all internationally agreed human rights and fundamental freedoms, including the right to development,” she said, adding that particular care must be taken to prevent and remedy any negative impact the outcome document might have on the human rights of vulnerable and marginalized groups.

Rio+20’s high-level meeting runs 20-22 June, and is expected to bring together over 100 heads of State and government, along with thousands of parliamentarians, mayors, UN officials, chief executive officers and civil society leaders to shape new policies to promote prosperity, reduce poverty and advance social equity and environmental protection.

The third and final session of Rio+20's Preparatory Committee concluded on Friday and Brazil, which holds the presidency of the Conference, now has the responsibility for deciding on how to proceed to achieve progress on the economic, social and environmental issues at the centre of the negotiations.

The Brazilian authorities have said that the consultation process on the outcome document is expected to conclude on Monday, after which it will be put forward for adoption by Member States when they meet from Wednesday onwards.

“Bearing in mind the immense tasks confronting the Rio Conference, it is important to recall the cross-cutting nature of human rights,” Ms. Pillay said. “Whether we are talking about peace and security, development, humanitarian action, the struggle against terrorism, climate change, or the environment, these challenges cannot be addressed in isolation from human rights.”

Made up of 47 Member States elected by the General Assembly, the Human Rights Council is an inter-governmental body within the UN system responsible for strengthening the promotion and protection of human rights around the globe and for addressing situations of human rights violations and make recommendations on them.

The Council holds no fewer than three regular sessions a year; this current session ends on 6 July. 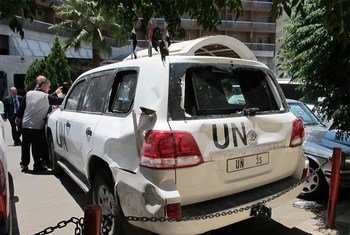 16 June 2012
The United Nations observer mission in Syria has suspended its activities owing to an intensification of armed violence across the country over the past 10 days, its chief announced today.