15 June 2012
The Security Council today urged Libyan authorities to work towards the immediate release of four staff members of the International Criminal Court (ICC) who have been detained in the country for over a week.

The four staff members travelled to the North African nation on Wednesday, 6 June, to meet with Saif Al-Islam Qadhafi in Zintan, in part as a privileged visit by the Office of Public Counsel for the Defence, currently appointed to represent Mr. Qadhafi in the case brought against him.

Mr. Qadhafi, the son of former Libyan leader Muammar al-Qadhafi, and the country’s former intelligence chief, Abdullah Al Sanousi, have been indicted by the ICC in relation to attacks against protesters and rebels during Libya’s pro-democracy uprising last year.

Council members “urge Libyan authorities at all levels and all concerned to work towards immediate release of all the ICC staff members,” the 15-member body said in a press statement.

It added that it is the legal obligation of Libya under Security Council resolution 1970, which referred the situation in Libya to the ICC last year, to cooperate fully with and provide any necessary assistance to the Court.

A delegation from the ICC, which is based in The Hague, visited the four detained staff members in Zintan on Tuesday and reported that they were in good health and treated well.

“The ICC welcomes the assistance provided by the Libyan authorities to date. The Court is very keen to address any regrettable misunderstandings on either side about the delegation’s mandate and activities during its mission in Libya,” it stated in a news release.

“The ICC expresses its strong hope that the release of the four detained persons will take place with no delay, in the spirit of the cooperation that has existed between the Court and the Libyan authorities,” it added. 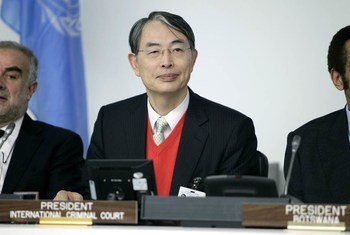 11 June 2012
Expressing concern over their safety, the International Criminal Court (ICC) has requested the immediate release of four of its staff members who have been detained in Libya since Thursday last week.