UN Photo/David Manyua
An observer with the UN Supervision in Syria interviews a local man while conducting a fact-finding mission in the village of Mazraat al-Qubeir.
14 June 2012

“With the increasing violence and deepening sectarian tensions, the risk of further mass atrocity crimes is high. The time for action is now,” the Special Advisers of the Secretary-General on the Prevention of Genocide and on the Responsibility to Protect, Francis Deng and Edward Luck, respectively, said in a joint statement.

They called on the international community to take action to meet its ‘responsibility to protect’ populations at risk of further atrocities in Syria, taking into consideration “the full range of tools available under the United Nations Charter.”

Agreed at a summit of world leaders in 2005 and sometimes known as ‘R2P,’ the principle of the responsibility to protect holds States responsible for shielding their own populations from genocide, war crimes, ethnic cleansing, and related crimes against humanity and requires the international community to step in if this obligation is not met.

The two men said they were gravely alarmed by the widespread reports of mass killings in attacks that involved a series of Government artillery and tank shellings on residential neighbourhoods, as well as alleged attacks against civilians and civilian infrastructure by a pro-government militia and other armed groups, which may constitute crimes against humanity.

“These massacres underscore the Syrian Government’s manifest failure to protect its population,” they stated.

The mass killings of civilians in Houla and Mazraat al-Qubeir, including the brutal assault and murder of women and children at close range, represent an alarming escalation in targeted attacks against civilians, they said, adding, “They must cease immediately.”

The Special Advisers underlined the importance of unimpeded access for the UN Supervision Mission in Syria (UNSMIS) to carry out its mandate, particularly in ascertaining the facts of such killings.

They also called on all parties to immediately end all acts of violence and commit to implementing the six-point peace plan put forward by the Joint Special Envoy of the UN and the Arab League for the Syrian Crisis, Kofi Annan.

UNSMIS observers are charged with monitoring the cessation of violence, as well as monitoring and supporting the full implementation of the peace plan.

Last week, the UN High Commissioner for Human Rights, Navi Pillay, noted that the killings in Syria over recent weeks are indicative of a pattern that may amount to crimes against humanity. She added that the confrontations in certain areas of the country have taken on the character of an internal conflict, subject to international humanitarian law and possible war crimes prosecution. 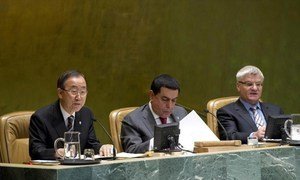 Amid growing atrocities and little evidence that the Syrian Government is living up to its commitment to stop the ongoing violence, United Nations officials today urged the world community to act with one voice to end the crisis in the Middle Eastern country.