UN Photo/E. Debebe
Timothy Wirth, member of the High-Level Group on Sustainable Energy for All.

14 June 2012
Energy – Timothy Wirth, member of the High-Level Group on Sustainable Energy for All

World leaders, along with thousands of participants from governments, the private sector, non-governmental organizations and other groups will come together from 20-22 June in Rio de Janeiro, Brazil, to take part in the UN Sustainable Development Conference (Rio+20).

The Conference aims to shape how countries and their citizens can reduce poverty, advance social equity and ensure environmental protection to achieve long-term growth.

At the moment, the oceans are facing a number of very serious challenges and those challenges not only affect the environment. They also affect and threaten economic services that depend on oceans.

But what do each of them entail and how can people contribute to a sustainable future?

In our Seven Issues, Seven Experts series, UN officials tell us more about each area and how we can contribute to make our planet more sustainable.

In the second instalment, the UN News Centre spoke with a member of Secretary-General Ban Ki-moon’s High-Level Group on Sustainable Energy for All, the UN Foundation’s President, Timothy Wirth, about why sustainable energy is a cornerstone for economic development and why shifting to green energy sources is easier than we think.

UN News Centre: How does energy fit into the sustainable development picture?

Timothy Wirth: Economic development is one of the UN’s two central missions; the other being peacekeeping. But we can’t do development without energy. You can’t have any type of development in terms of economic growth, job development, manufacturing – just about anything – without energy. And then, over a long period of time, it is not possible to continue the use of energy without a focus on its sustainability. We have to think about sustainable energy.

So, if access to energy is a necessary first step towards any kind of development goals, then sustainable energy becomes the second step, the second route we have to pursue at the UN for reducing poverty, empowering women, providing healthcare and education, plus developing the basic job structure of the economy.

UN News Centre: There are many sources of energy. Where does sustainable energy come from?

Timothy Wirth: Energy itself comes from a whole variety of different sources, as you know – oil, nuclear, solar, biofuel, natural gas and so on. Low-carbon energy is the one that is necessary if we are going to stabilize the planet’s climate system without catastrophic consequences. Fossil fuels, when burned, create carbon, which goes up into the atmosphere, warming it up, and causing global climate change, which is not sustainable in the long-term. When thinking about long-term energy use, we also have to consider long-term concerns related to our own atmosphere. Thus, the issue of sustainable energy becomes the equation linking energy with atmospheric health.

Solar energy, nuclear energy and wind do not produce carbon unlike fossil fuels like oil, gas and coal. The important mix over a long-term period of time consists of developing energy strategies that combine both non-fossil fuels with fossil fuels, so that we end up with a low-carbon mix overall.

UN News Centre: What do governments need to do to get this energy mix right?

Timothy Wirth: Governments have to provide the right structure to encourage lower carbon fuels, and there are lots of ways of doing that. One of them, which has been tried and is working in Europe, is the development of an economic system called a cap-and-trade system, which caps the amount of carbon that can be emitted and then has a pricing mechanism that goes with that.

It is hoped that more rural households in developing countries will be able to get clean renewable energy. Photo: CDM-UNFCCC

There are other rules that can be applied. For example, to require that in any utility, a certain percentage of its production comes from renewable fuel sources. It cannot come from oil or gas; so that is a second way of doing it. There are a variety of mechanisms that governments can follow to attempt to lower the intensity of carbon going into the atmosphere and, therefore, to try to salvage our overall environment.

UN News Centre: Many of these measures require a regulation of the market. Will this compromise economic growth?

Timothy Wirth: It doesn’t have to. One can do energy systems that are absolutely consistent with the goal of economic growth. For example, in many, many countries, the increasing amounts of solar energy and wind energy have in fact, by most measures, helped the economy to grow more rapidly than it would if the economy was dependent upon only traditional fossil fuels.

In addition, usually a strategy related to energy includes a major commitment to energy efficiency, to use the energy one already has much more efficiently – which makes, in effect, energy efficiency the most important fuel of all. It becomes the so-called first fuel. So economic development does not have to depend on traditional sources of fossil fuels, but rather can depend upon cleaner fuels which in many situations are even less expensive than traditional fossil fuels.

A family in Mongolia using a solar panel to generate power for their tent. UN Photo/E. Debebe

UN News Centre: Why is there still resistance to shifting to more sustainable energy sources?

Timothy Wirth: Well, the very large companies that have enormous investments in traditional fossil fuels like coal and oil are going to be opposed to any kind of change. So they are going to argue that it is impossibly expensive to shift from our traditional fossil fuels into a non-fossil fuel economy. But the fact is that this is not true. That, in fact, the shift to non-fossil fuels is ultimately going to be much less expensive, much less damaging, and, in the long-term, it is going to be sustainable. And it will be able last from generation to generation, rather than having to, in a couple of generations, worry about totally fouling up the Earth’s atmosphere.

UN News Centre: Can you give an example of a successful sustainable energy initiative already in place?

Timothy Wirth: There are many, many examples of this kind of sustainable energy access. For example, the United States went through a remarkable shift from about 1910 to 1940 in which electricity was made available to practically everybody in the United States, through the rural electrification energy initiative. China, Viet Nam and Brazil are all currently involved in extending their own grids. In Brazil, almost 90 per cent of the electricity comes from renewable energy sources like hydropower or biomass and wind. So we have examples of access, like in the United States, and of sustainable energy, as in Brazil.

Other countries are now working very hard at trying to achieve this. In India, for example, we were just there and Jairam Ramesh, the rural development minister, was describing, with enormous energy, how solar-water pumps are providing access to clean water and effectively are transforming people’s lives all over rural India.

UN News Centre: What actions can people take to contribute to a world where there is sustainable energy?

Timothy Wirth: People in their individual lives can use their own energy resources much more efficiently. We know that that will be the first and the cheapest way in which to move us toward a world of sustainability. We can then make sure that we are speaking with our governments about the changes in policy that have to be made.

These are choices that governments themselves are going to make, not the UN. But the governments are going to be making choices about renewable energy, about the requirements of renewable energy in the grid, about carbon requirements… there are going to be a whole range of actions by individual governments about what they can do, and must do, related to long-term sustainable energy. And we will have many examples of that in Rio, both in the main deliberations at Rio and at many of the energy side events that will be occurring in a couple of weeks in Rio.

The Middelgruden offshore wind farm which was developed off the Danish coast in 2000 and consists of 20 turbines. UN Photo/E. Debebe

UN News Centre: Is there a specific goal from Rio+20 that you are hoping for in relation to sustainable energy? 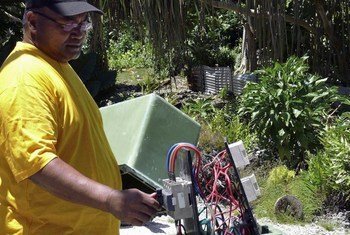 9 May 2012
Twenty small island developing nations have announced new actions to reduce dependence on fossil fuels and end poverty, as they wrapped up a sustainable energy conference organized by the United Nations and the Government of Barbados.