Despite an overall positive outlook for cereal production worldwide, several regions of the world are expected to struggle with the consequences of poor rainfall, severe weather, armed conflict and displacement, the United Nations said today.

According to the UN Food and Agriculture Organization’s (FAO) quarterly forecast of agricultural production and food – the Crop Prospects and Food Situation report – a record increase of 3.2 per cent in world cereal production is expected in 2012, totalling an estimated 2, 419 million tonnes, mainly on the strength of a bumper maize crop in the United States.

In addition, wheat and coarse grains prices eased in May, mostly during the second half, driven by good supply prospects.

But, despite the positive global trends, countries in Africa’s Sahel region continue to face serious challenges to food security due to locally high food prices and civil strife, FAO said in a news release.

Humanitarian organizations estimate that there are currently some 18 million people facing food insecurity in Africa’s Sahel region, which stretches from the Atlantic Ocean to the Red Sea, and includes Chad, Mali, Mauritania, Niger, and the northern regions of Cameroon and Nigeria.

FAO noted that Yemen and Syria are also among the countries experiencing increasing levels of food insecurity.

"The situation in Yemen and Syria reminds us of the clear link between food security and peace. In this case, internal conflict is causing food insecurity,” said FAO’s Director-General, José Graziano da Silva, in a news release.

“But, it works the other way around as well,” he added. “Throughout the world we see crisis after crisis caused, in its entirety or in part, by the lack of food or disputes over natural resources, especially land and water.”

The Crop Prospects and Food Situation report also lists 35 countries in need of external food assistance, including Afghanistan, the Democratic People's Republic of Korea, Haiti, Iraq and Mali. Of the total, 28 countries are in Africa.

“This only goes to show, again, that hunger today is mainly a problem of access. Millions of poor families worldwide lack the means to produce their own food or decent jobs and income to buy the food they need,” Mr. Graziano da Silva said.

Looking ahead, FAO noted that world cereal stocks for crop seasons ending in 2013 are forecast to increase to 548 million tonnes, up seven per cent from their opening levels and the highest since 2002.

This outlook is four percent, or 23.5 million tonnes, higher than was reported last month, entirely due to an increase in the forecast for world coarse grain inventories which now stand at 201 million tonnes – up 20 per cent from the previous season's low of 167 million tonnes.

Globally, the FAO Food Price Index, which measures the monthly change in international prices of a basket of food commodities, dropped by four per cent in May due to generally favourable supplies, growing world economic uncertainties, and a strengthening of the US dollar. 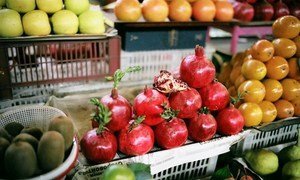 The United Nations today reported a sharp drop in global food prices during May owing to generally favourable supplies, growing global economic uncertainties and a strengthening of the United States dollar.