The Security Council today called on all sides in Yemen to immediately reject the use of violence to achieve political goals, and demanded the cessation of all actions aimed at undermining the Government of National Unity and the ongoing political transition.

In a unanimously adopted resolution, the 15-member body expressed its readiness “to consider further measures,” including under Article 41 of the UN Charter, if actions such as attacks on oil, gas and electricity infrastructure continue, as well as interference with the decisions relating to the restructuring of the armed and security forces and obstruction of decrees on military and civilian appointments.

Article 41 falls under Chapter VII of the Charter, and deals with threats to peace, breaches of peace and acts of aggression. It states that the Council may decide what measures – not involving the use of armed force – are to be employed to give effect to its decisions, and it may call on Member States to apply such measures.

Yemen has been undergoing a democratic transition, under the leadership of President Abdrabuh Mansour Hadi Mansour, who came to power in February’s election. This followed an agreement signed by warring factions in November 2011 on a transitional settlement in the wake of widespread protests similar to those seen across the Middle East and North Africa, and the resignation of former president Ali Abdullah Saleh.

An important element of the transition is the all-inclusive dialogue, scheduled to take place later this year, and whose outcome will feed into the constitution-making process that is to conclude in late 2013, enabling general elections to take place in February 2014.

In its resolution, the Council emphasized the importance of conducting a “fully-inclusive, participatory, transparent and meaningful” national dialogue conference, including with youth and women’s groups and called on all stakeholders to participate in this process.

In addition to the convening of the national dialogue conference, the Council noted that the second phase of the transition process should also focus on restructuring the security and armed forces under a unified professional national leadership structure, and the ending of all armed conflicts; steps to address transitional justice and to support national reconciliation; and, constitutional and electoral reform and the holding of general elections by February 2014.

The Council also reminded the Yemeni Government and other actors of the need to release immediately those protesters unlawfully detained during the crisis, and urged the Government to pass legislation on transitional justice to support reconciliation, without further delay. 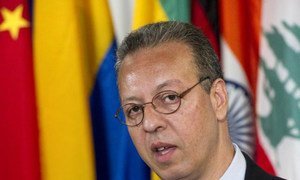 Yemen’s national dialogue conference, slated for next year, will be crucial for the democratic transition underway in the country, which is dealing with serious security concerns, an unprecedented humanitarian crisis and many unresolved conflicts, a senior United Nations official said today.