Secretary-General Ban Ki-moon is deeply concerned over an increase in the level of violence in Syria and calls for an immediate end to the fighting there, his spokesperson said today.

“The Secretary-General expresses his deep concern at the dangerous intensification of armed violence across Syria over the past several days, and the grave danger facing civilians in areas under fire,” the UN chief's spokesperson said in a statement on Monday evening. “The bloodshed and fighting must stop at once.”

Earlier Monday, observers with the United Nations Supervision Mission in Syria (UNSMIS) reported an increased level of armed confrontation between Government and opposition forces, especially in the city of Homs, a Syrian opposition stronghold, and in Rastan and Talbiseh, north of the city. The observers also called on the parties to grant them immediate and unfettered access to conflict zones.

In the statement, Mr. Ban's spokesperson noted that the Syrian Government's intensive military operations – including the shelling of Homs and reportedly other population centres, as well as firing from helicopters on Talbiseh and Rastan – are resulting in heavy civilian casualties and human rights violations.

“The Secretary-General underlines the importance of unimpeded access by UNSMIS to Al-Haffa, amid reports of a build-up of Government forces around the town,” the spokesperson stated, noting that in this context, UNSMIS staff are also observing planned and coordinated attacks on Government forces and civilian infrastructure in multiple locations.

“The violence as a whole is intensifying amid the shifting tactics,” the spokesperson said. “The Secretary-General condemns this escalation of armed violence, in particular the shelling of population centres and attacks against civilian infrastructure by all sides, which impairs delivery of essential services and exacerbates the humanitarian crisis.”

“The Secretary-General further calls on all sides to stop the killing, cease armed violence in all its forms and seek peaceful political means to resolve the deepening crisis, as called for by the six-point plan,” Mr. Ban's spokesperson said. “The parties must abide by their obligations under international law.”

He stated that Secretary-General Ban “reiterates his call for all countries with influence on either side to convince them to put the welfare of Syrians first, to pull back from the brink and to reflect on the devastating consequences that increasing violence is having for the people of Syria, the country and the region,” and remains ready to work with the entire international community to assist the sides to achieve a political solution to the crisis.

UNSMIS's observers have been charged with monitoring the cessation of violence in Syria, as well as monitoring and supporting the full implementation of a six-point peace plan put forward in March by the Joint Special Envoy of the United Nations and the Arab League for the Syrian Crisis, Kofi Annan.

Late last week, Secretary-General Ban said that, at the request of the Security Council, he will soon put forward a range of options for resolving the crisis in Syria.

He noted that the six-point peace plan – which was endorsed by the Council – remains at the centre of efforts of resolve the crisis, but “at the same time, in view of the deteriorating situation, I would welcome further international discussions.”

The UN chief added that, along with Joint Special Envoy Annan and the League of Arab States' Secretary-General Nabil Elaraby, he had seen little evidence of the Syrian Government complying with its commitments under the six-point peace plan, while at the same time, the opposition was hardening and turning increasingly to arms. 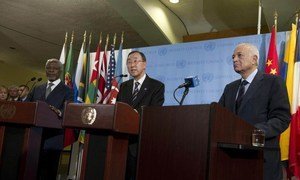