Syria: UN observers concerned over escalation of violence in city of Homs

UNSMIS
A convoy of UN observers travels in Syria.

Syria: UN observers concerned over escalation of violence in city of Homs

11 June 2012
Amidst reports of heavy fighting, United Nations observers in Syria are concerned over the escalation of violence in the city of Homs, a Syrian opposition stronghold.

“UN observers reported heavy fighting in Rastan and Talbiseh, north of the city, with artillery and mortar shelling, as well as firing from helicopters, machine guns and smaller arms,” the spokesperson for the UN Supervision Mission in Syria (UNSMIS), Sausan Ghosheh, said in a statement today.

“In Talbiseh, UN observers reported that the Free Syrian Army captured Syrian Army soldiers,” she added. “The impact from heavy artillery shelling and machine gun firing was heard and seen over the neighbourhood of Khaldiyeh in the city centre.”

UNSMIS has also received reports of a large number of civilians, including women and children trapped inside the town, and are trying to mediate their evacuation. Its observers have not yet been able to confirm reports on the number of casualties.

“UNSMIS calls on all sides to stop the killing and human rights abuses, to ensure the protection of civilians and to respect international law,” Ms. Ghosheh said, adding that the Mission further calls on the parties to grant UNSMIS observers immediate and unfettered access to conflict zones.

The UN estimates that more than 10,000 people, mostly civilians, have been killed in Syria and tens of thousands displaced since the uprising against President Bashar al-Assad began some 15 months ago.

Earlier Monday, the Joint Special Envoy of the United Nations and the Arab League for the Syrian Crisis, Kofi Annan, also voiced his concern over the latest reports of violence and the escalation of fighting by both Government and opposition forces.

UNSMIS observers have been charged with monitoring the cessation of violence in Syria, as well as monitoring and supporting the full implementation of a six-point peace plan put forward by Joint Special Envoy Annan.

Late last week, Secretary-General Ban Ki-moon said that, at the request of the Security Council, he will soon put forward a range of options for resolving the crisis in Syria. He noted that the six-point peace plan – which was endorsed by the Council – remains at the centre of efforts of resolve the crisis, but “at the same time, in view of the deteriorating situation, I would welcome further international discussions.”

The UN chief added that, along with Joint Special Envoy Annan and the League of Arab States’ Secretary-General Nabil Elaraby, he had seen little evidence of the Syrian Government complying with its commitments under the six-point peace plan, while at the same time, the opposition was hardening and turning increasingly to arms. 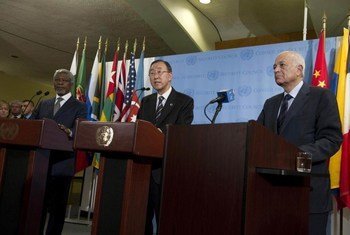 7 June 2012
At the request of the Security Council, Secretary-General Ban Ki-moon will soon put forward a range of options for resolving the crisis in Syria.