11 June 2012
Despite the tremendous progress that has been achieved in the response to HIV/AIDS, it is urgent that efforts be redoubled to end this global epidemic, top United Nations officials stressed today, highlighting in particular the need to expand services and scale up resources.

“Together we must act strategically and effectively to achieve the vision of a world with zero new HIV infections, zero discrimination and zero AIDS-related deaths,” the General Assembly President, Nassir Abdulaziz Al-Nasser, said in remarks to an Assembly meeting held to review progress following last year’s high-level meeting on HIV and AIDS.

In the remarks, delivered by Acting President and Ambassador of Benin Jean-Francis Zinsou, Mr. Al-Nasser said that the world is “riding a wave of renewed hope and accelerating progress against HIV.”

There have been dramatic reductions in new infections in the hardest-hit countries, and among young people worldwide, as well as a scaling up of treatments in low- and middle-income countries in the past decade, he noted.

“Yet, critical challenges remain,” the President added, stating that HIV still disproportionately affects vulnerable populations, and funding is in decline, threatening the ability of the world community to sustain necessary progress.

“We must ensure that the commitments that were made are implemented, so that we can re-direct the course of the epidemic, and avert future costs to society,” he said.

At last year’s high-level meeting, Member States adopted a political declaration committing themselves to ambitious new targets to combat HIV/ AIDS, with the aim of ridding the world of a disease that has claimed more than 30 million lives since the virus was first identified three decades ago.

Member States pledged to deliver antiretroviral therapy to 15 million people living with HIV; work towards eliminating new infections in children and substantially reducing maternal AIDS-related deaths; reduce by 50 per cent new infections from sexual transmission and among people who inject drugs; substantially increase HIV funding, with the goal of mobilizing $22 billion to $24 billion annually; meet the needs of women and girls; and eliminate stigma and discrimination.

“Today the international community has cause for hope and optimism in the response,” Secretary-General Ban Ki-moon wrote in his first report on the issues arising from that session – and issued in April this year – while also highlighting the many challenges that remain.

Substantial access gaps persist for key services, with especially difficult obstacles experienced by populations at higher risk, he noted. Punitive laws, gender inequality, violence against women and other human rights violations continue to undermine national responses. Of special concern is the first-ever decline in HIV funding in 2010, potentially jeopardizing the capacity of the international community to close access gaps and sustain progress in the coming years.

“Efforts must be refocused to achieve real results and end a global epidemic of historic proportions,” he wrote. “The response must be smarter and more strategic, streamlined, efficient and grounded in human rights.”

In his remarks to the Assembly meeting today, Mr. Ban emphasized the need to do more “to win the race,” stressing the need to cut the number of new HIV infections by one million by 2015, reach out to people at risk, focus on the special needs of women and children, combat discrimination, and strengthen funding for critical efforts.

“Last year marked the thirtieth anniversary of struggle against AIDS – but we were not looking back; we were looking to a future where all people get the prevention and treatment services they need,” he told Member States. 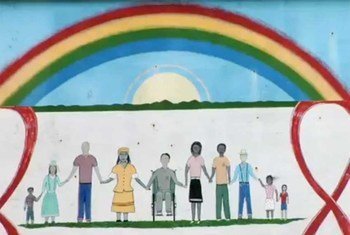 25 January 2012
The remarkable progress achieved in the AIDS response must be sustained, the United Nations has stressed, calling for innovative sources of financing and continued support for the Global Fund that helps countries achieve their targets in this field.