WFP/N. Sanders
With conflict escalating in eastern Congo, WFP has been providing lifesaving assistance to families who were forced to leave everything behind.

8 June 2012
The United Nations World Food Programme (WFP) today stressed the need for sufficient resources as it strives to meet the needs of a growing number of people displaced by violence in eastern Democratic Republic of the Congo (DRC).

“With the conflict escalating in the past few weeks, WFP has been providing lifesaving assistance to Congolese who were forced to leave everything behind,” said WFP’s Regional Director for East and Central Africa, Stanlake Samkange.

“But continued violence will lead to more people requiring help and it will be critical to ensure that WFP has sufficient resources to address the needs of the newly displaced,” he added.

Overall, WFP is currently providing assistance to a total of 532,000 Congolese refugees and IDPs in Africa’s Great Lakes region. Its operations in DRC, Uganda and Rwanda currently have a combined funding shortfall of some $46 million over the next six months.

This week alone, the agency provided monthly food rations to close to 20,000 newly displaced people and host families in Beni in the province of North Kivu, amid concerns about the effect of violence on civilians in the country’s eastern region.

Tens of thousands of people have fled their homes, many seeking refuge near the city of Goma or elsewhere in eastern DRC, WFP stated in a news release. Thousands more have made the trek across the Rwandan and Ugandan borders in search of security.

In North and South Kivu provinces, WFP is providing emergency food assistance to more than 244,000 displaced people. It plans to provide food to 4,000 new internally displaced persons in Rutshuru, North Kivu, in the coming days and carry out an assessment of the needs of some 80,000 people who have arrived in the same area. Another 8,000 people are scheduled to receive food assistance in Minova, South Kivu, next week.

In Uganda, more than 21,000 Congolese who have crossed the border since the beginning of the year have received assistance at the Nyakabande reception centre in Kisoro and elsewhere in the country.

Meanwhile, close to 11,000 people have crossed the border into Rwanda since April, according to the Office of the UN High Commissioner for Refugees (UNHCR). The refugees are temporarily housed at the Nkamira transit centre, where they receive food from WFP.

Pneumonia and diarrhoea prevention can save millions of lives – UN 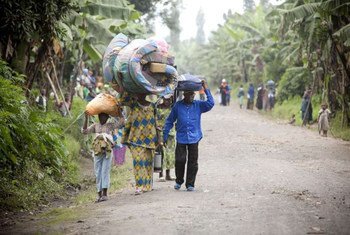 29 May 2012
The latest outbreak of violence in the east of the Democratic Republic of the Congo (DRC) has displaced more than 40,000 people, the United Nations refugee agency said today, adding that the distribution of relief items will soon commence among those uprooted, with most of them having sought shelter in schools and churches.