8 June 2012
An independent United Nations human rights expert today expressed deep concern over the fate of two Palestinian prisoners detained without charges by Israel, and called for their immediate release.

“These individuals are protesting against their detention without charges and are suffering immensely for it,” said the Special Rapporteur on the situation of human rights in the Palestinian territories occupied since 1967, Richard Falk, in a news release. “There is no acceptable basis for continuing to hold these persons, and Israel will be responsible if any permanent harm results.”

“Mr. Sarsak has lost one third of his body weight and Mr. Rikhawi is suffering from aggravated diabetes and asthma,” Mr. Falk said. “If Israeli officials cannot present evidence to support charges against these men, then they must be released immediately.”

“Israel must end the appalling and unjust treatment of Palestinian prisoners and the international community needs to raise its voice and take steps to end Israel’s flagrant misuse of administrative detention,” the Special Rapporteur added.

In December last year, Palestinian prisoners began a series of hunger strikes, Mr. Falk noted, adding that the strikes have “called attention to Israel’s abusive reliance on administrative detention, but also to conditions that fail to meet legal standards of international humanitarian law for the more than 4,000 Palestinians imprisoned.”

According to the Office of the UN High Commissioner for Human Rights, Israel currently has approximately 300 Palestinians detained without charges.

“I have requested information regarding each of these persons and I will follow up on each case and address this matter in my forthcoming report to the Human Rights Council,” Mr. Falk said. His report to the Council is due on 2 July 2012. 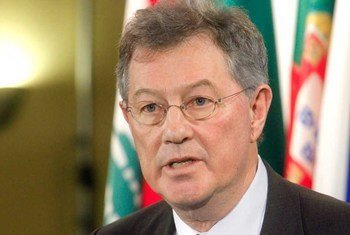 3 May 2012
A senior United Nations official said today he was deeply troubled by reports about the critical condition of at least two Palestinians being held by Israel, who have been on hunger strike for over two months, and urged the Government to preserve the health of the prisoners.