The United Nations today reported a sharp drop in global food prices during May owing to generally favourable supplies, growing global economic uncertainties and a strengthening of the United States dollar.

The monthly food price index of the Food and Agriculture Organization (FAO) averaged 204 points in May, down 9 points from April, the agency said in a news release. This was the lowest level since September 2011.

The index measures the monthly change in international prices of a basket of food commodities, including meat, dairy, sugar, and cereals.

“Crop prices have come down sharply from their peak level but they remain still high and vulnerable due to risks related to weather conditions in the critical growing months ahead,” said Abdolreza Abbassian, a senior grains economist with FAO, in a news release.

The agency raised the forecast for world cereal production by 48.5 million tonnes since May, with the bulk of the increase expected to come mainly from maize in the US amid an early start of the planting season and prevailing favourable growing conditions.

“However, with planting still to be completed and much of the crop at very early stages of development, the final outcome will depend greatly on weather conditions in the coming months,” the agency stated.

Global rice production in 2012 is expected to increase by 2.2 per cent from 2011, to some 490 million tonnes, mostly reflecting larger plantings in Asia. At the same time, the latest indications point to a decrease of about 3 per cent in the production of wheat this year, to 680 million tonnes.

FAO noted that this is still well above the average of the past five years.

♦ Receive daily updates directly in your inbox - Subscribe here to a topic.
♦ Download the UN News app for your iOS or Android devices.
food prices 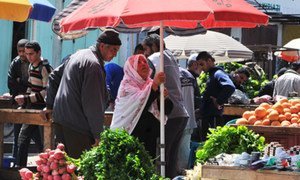 Global food prices fell by 1.4 per cent between March and April, but seem to have stabilized at a relatively high level, the United Nations Food and Agriculture Organization (FAO) said in its monthly food price index released today.