United Nations independent experts today called on the Malaysian Government to protect the members of a group of civil society organizations campaigning for electoral process reform, who have been the target of harassment and intimidation.

United Nations independent experts today called on the Malaysian Government to protect the members of a group of civil society organizations campaigning for electoral process reform, who have been the target of harassment and intimidation.

The members of the umbrella group Coalition for Clean and Fair Elections (also known by the Malay name Bersih) have received threats because of their advocacy work, which calls for reform of the electoral process ahead of the country’s general election, set to take place in April next year. The director of the organization, Ambiga Sreenevasan, has been particularly threatened.

“I am seriously concerned by these disturbing acts of harassment against a prominent woman human rights defender who is being targeted because of her legitimate human rights activities in Malaysia,” said the UN Special Rapporteur on human rights defenders, Margaret Sekaggya. “I urge the authorities to investigate thoroughly these allegations, hold the perpetrators accountable, and effectively protect Ms. Sreenevasan, and more generally, Bersih members.”

According to the Office of the High Commissioner for Human Rights (OHCHR), Ms. Sreenevasan has received credible threats against her life in the past months, and has been labelled by various groups as an enemy of the State and a traitor, who should be expelled from the country, because of her work with Bersih. Effigies of Ms. Sreenevasan have also been set alight, and recently, she had to cancel her participation in a public event because of fears for her safety.

In addition, Ms. Sreenevasan, along with other organizers from Bersih, has been sued by the federal Government in relation to property which was allegedly damaged during a rally organized by the coalition of non-governmental organizations in April.

“Holding assembly organizers liable for the alleged unlawful conduct of others is not compatible with standards governing the right to freedom of peaceful assembly, and has a detrimental effect on the exercise of this right,” said Special Rapporteur Kiai. “I urge the Government of Malaysia to withdraw the complaint against her.”

“The Government of Malaysia should fully guarantee the right to freedom of opinion and expression of those advocating for electoral reform, and should ensure a safe and conducive environment for journalists and those monitoring and reporting on demonstrations,” added Special Rapporteur La Rue. “The rights to freedom of opinion, expression and peaceful assembly are fundamental pillars of democracy.”

Mr. Kiai and Ms. Sekaggya also reminded the Government of their requests to visit the country given the urgency of the situation.

♦ Receive daily updates directly in your inbox - Subscribe here to a topic.
♦ Download the UN News app for your iOS or Android devices.
NGO

Workshop examines ways to respond to critics of UN 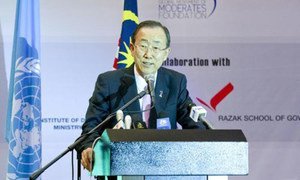 Ban praises Malaysia’s poverty reduction, urges it to share its experiences with others

Secretary-General Ban Ki-moon today commended Malaysia for “making great strides” in reducing poverty, adding that the country must share its experiences with the world to enhance development in other nations.