UNHCR/V.Tan
Sudanese refugees from Blue Nile state line up to collect water in a camp.
7 June 2012

The top United Nations relief official in Sudan today voiced deep concern at reports that more people are fleeing the country’s southern regions to escape fighting and severe food shortages, and stressed the need for humanitarian access to all those in need.

There are reports of raids and looting of markets by armed groups in both South Kordofan and North Kordofan states which have recently forced more civilians to flee their homes, according to a statement issued by the office of the UN Resident and Humanitarian Coordinator in Sudan, Ali Al-Za’tari.

There are also reports of high numbers of people who have been fleeing to South Sudan to escape the continued fighting and severe food shortages in South Kordofan and Blue Nile states, the statement added.

Mr. Al-Za’tari reiterated calls for an end to the fighting and for humanitarian access to all vulnerable civilians, especially women and children. The terrorizing of civilians within Sudan and the increase in numbers of refugees fleeing to South Sudan points to an “extremely worrying” situation, he said.

“It is essential that humanitarian assistance reaches all people in need, wherever they may be located,” he added.

Last week, the Office of the UN High Commissioner for Refugees (UNHCR) reported that an estimated 20,000 refugees have amassed on the South Sudan border after fleeing conflict and lack of food. The recent wave of refugees brings the total number of Sudanese refugees in South Sudan’s Upper Nile state to about 100,000.

Mr. Al-Za’tari stressed the need for continued dialogue between all parties to facilitate a peaceful solution to the conflicts.

“Ultimately, what is needed in South Kordofan and Blue Nile is for fighting to stop and for a political settlement to be negotiated. People need to be able to return to their homes and villages and rebuild their lives in dignity, safety and without fear,” he said. 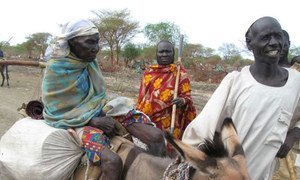 An estimated 20,000 refugees have amassed on the South Sudan border after fleeing conflict and lack of food, the United Nations refugee agency said today, adding that it is working to relocate them and provide them with emergency aid.