6 June 2012
The top United Nations envoy to the Central African Republic (CAR) today stressed the need for the country to continue building on the momentum recently created on the political, security and disarmament fronts.

“The CAR is at a critical juncture,” the Secretary-General’s Special Representative and the head of the UN Integrated Peacebuilding Office in the CAR (BINUCA), Margaret Vogt, told the Security Council.

Briefing the 15-member body on the latest report by Secretary-General Ban Ki-moon on the CAR, she added that the “dynamic of peace” between the Government and the politico-military groups and the dialogue called by the President offer a real chance for the stabilization of the country.

Despite the gains made in recent years, the country still faces a number of challenges, including extreme poverty, weak national institutions, corruption, a high rate of violent crime perpetrated by armed movements, and human rights violations.

Ms. Vogt said that in spite of some positive developments among the CAR’s political-military parties, two foreign armed groups continue to pose a serious threat to the peace process. They are the Front Populaire pour le Redressement, led by Chadian rebel Baba Ladde, and the Ugandan rebel group, the Lord’s Resistance Army (LRA).

The first half of 2012 has witnessed a spike in LRA attacks in the CAR, the Special Representative noted. “However, there is now a new momentum in national and international efforts to address the LRA challenge in the CAR, and in the sub-region as a whole,” she said.

The country also faces one of the “most acute and forgotten crises,” she added. “The humanitarian situation remains highly precarious and is seriously impacted by the lack of basic health infrastructure.”

Ms. Vogt noted that some 75,000 Central Africans remain displaced and living in precarious conditions, out of which over 20,000 were displaced by the LRA between 2008 and 2011.

The report also notes an upsurge in human rights violations, including summary executions, torture, arbitrary arrests and detentions perpetrated by the security and defence forces, particularly by some members of the presidential guards.

In a statement to the press following the briefing, the Security Council expressed deep concern at the surge in reports of human rights violations committed by defence and security forces, including arbitrary arrest, illegal detention and reports of abuses including harassment in the area controlled by armed groups.

“They [Council members] called upon the Government to investigate these violations and bring those responsible to justice and to ensure full respect for the rule of law and human rights, including freedom of the press,” said the statement.

Council members also voiced concern at the security and humanitarian situations in the country, and urged the Government to continue the dialogue in an inclusive manner, with the participation of the opposition, “which is nearly absent from the democratic institutions,” and civil society. 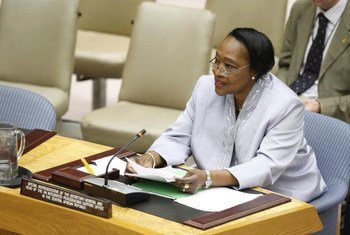 5 April 2012
The head of the United Nations peacebuilding office in the Central African Republic (CAR) today urged the international community to support ongoing efforts to restore stability in the country, saying that more $19 million is required to complete its disarmament, demobilization and reintegration (DDR) process.