The Ugandan rebel group known as the Lord’s Resistance Army (LRA) remains among the most persistent perpetrators of grave violations against children, says a new United Nations report.

Secretary-General Ban Ki-moon’s first report to the Security Council on the situation of children affected by the LRA documents violations committed against children, and measures taken to address the LRA threat between July 2009 and February 2012.

Over the reporting period, at least 591 children, including 268 girls, were abducted and recruited by the LRA, mostly in the Democratic Republic of the Congo (DRC), but also in the Central African Republic (CAR), and in South Sudan.

The LRA is currently believed to be made up of between 200 and 500 fighters. Formed in the 1980s in Uganda, the LRA mainly directed its attacks against Ugandan civilians and security forces for over 15 years. By 2004, it had largely been driven of the area through a sustained military effort. It then exported its activities to Uganda’s neighbouring countries, with practices that include the recruitment of children, rapes, killing and maiming, and sexual slavery.

“The LRA continues to cast a long shadow across central Africa, causing enormous suffering for children,” said the Secretary-General’s Special Representative for Children and Armed Conflict, Radhika Coomaraswamy, at a press conference at UN Headquarters today.

The Special Representative’s office monitors six grave violations against children: recruitment and use of child soldiers; killing and maiming; sexual violence; denial of humanitarian access; abduction; and attacks on schools and hospitals.

Ms. Coomaraswamy said that due to protection activities and the military operations carried out in the affected areas, the LRA is weakened, but it continues to be able to make random attacks.

In the DRC, a trend appeared in 2010, and was more apparent in 2011, of children being abducted for very short periods to carry loot before they managed to escape or were left behind, according to a news release on the report that added that this suggests a change in the modus operandi of the LRA.

All girls mentioned in the report were forcibly married to combatants, and those who escaped with their babies born of rape were stigmatized by their communities.

The Special Representative noted that the number of children killed and maimed appears to have declined since 2008, perhaps due to increased protection efforts by UN peacekeepers, the massive displacement of civilians fleeing the LRA threat, and the presence of security forces in the LRA’s area of operations.

There was also some “relative good news” in that the LRA no longer attack schools and hospitals, she said, adding that despite this, the attacks keep thousands from attending schools because of displacement.

In his report, Mr. Ban lauds efforts by the Uganda People’s Defence Force and the African Union to address the threat posed by the LRA. He recommends that all military efforts to address the LRA ensure that the protection of civilians is a central aspect of operations, including through the development of standard operating procedures for the handling of children separated from the LRA.

While noting the need to encourage defections from the LRA as a strategy to weaken the armed group, Mr. Ban indicated that there must be no impunity for war crimes and crimes against humanity, including grave violations against children – a point also stressed by his Special Representative.

In March, the United Nations and the African Union (AU) launched the UN-supported and AU-led Regional Cooperation Initiative against the LRA (RCI-LRA) and its military component, the RTF, with the aim of bringing an end to the LRA’s activities. The RTF is comprised of 5,000 soldiers drawn form the four countries affected by the LRA – Uganda, DRC, CAR and South Sudan. 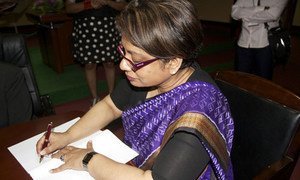 The United Nations envoy for children and armed conflict today urged the Ugandan Government bring to justice a senior commander of the brutal Lord’s Resistance Army (LRA), who was captured over the weekend, saying he is responsible for some of the most egregious abuses against children.