4 June 2012
The head of the United Nations atomic watchdog today called on Iran to fulfil its international obligations to ensure that its nuclear programme is of an exclusively peaceful nature.

“Iran is not providing the necessary cooperation to enable the agency to provide credible assurance about the absence of undeclared nuclear material and activities in Iran, and therefore to conclude that all nuclear material in Iran is in peaceful activities,” the Director General of the International Atomic Energy Agency (IAEA), Yukiya Amano, said in his introductory statement to a meeting of the IAEA’s Board of Governors in Vienna.

“I urge Iran to take steps towards the full implementation of all relevant obligations in order to establish international confidence in the exclusively peaceful nature of its nuclear programme,” he added.

Iran’s nuclear programme – which its officials have stated is for peaceful purposes, but some other countries contend is driven by military ambitions – has been a matter of international concern since the discovery in 2003 that the country had concealed its nuclear activities for 18 years in breach of its obligations under the Nuclear Non-Proliferation Treaty.

According to media reports, there had been no breakthrough in talks between Iran and the E3+3 grouping – made up of the United Kingdom, the United States, China, France, Germany and Russia – in Baghdad, Iraq, in late May, with Iran rejecting calls to stop enriching uranium which could be used for weapons and the other six countries refusing to halt economic sanctions on Iran.

On 21 May, Mr. Amano met with senior officials in Tehran, the Iranian capital, with whom he discussed a number of issues, including those related to the possible military dimensions to Iran’s nuclear programme. During the meeting, Iran agreed to implement a so-called ‘Structured Approach’ document.

In his remarks on Monday, Mr. Amano called on Iran to sign and implement the Structured Approach document as soon as possible, and provide early access to the Parchin nuclear facility site.

“I was assured that agreement on the structured approach would be expedited and that the remaining differences between Iran and the Agency would not be an obstacle to reaching agreement,” the IAEA chief said.

Mr. Amano also informed the Board of Governors that the agency continues to verify the non-diversion of nuclear material declared by Iran under its Safeguards Agreement, and that the next meeting between the IAEA and Iran would take place on 8 June in Vienna.

The 35-nation Board meeting is expected to cover the IAEA’s work on nuclear verification, safety, security and the peaceful use of nuclear technologies. The Board, which meets five times a year at the IAEA headquarters in Vienna, Austria, is the agency’s policymaking body. 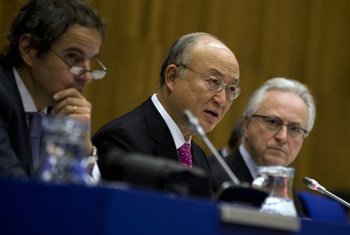 5 March 2012
The head of the United Nations atomic watchdog today highlighted ongoing serious concerns about a possible military dimension to Iran’s nuclear programme, adding that the country has tripled its monthly production of enriched uranium.