“The interests of the tobacco industry and of public health are directly opposed,” Secretary-General Ban Ki-moon said in his message for World No Tobacco Day, observed annually on 31 May. 12

“While governments and the international health community try to implement effective measures to contain tobacco use and protect the health of people, their efforts are being aggressively opposed by an industry whose products kill people,” he added.

The World Health Organization’s (WHO) theme for this year’s World No Tobacco Day is ‘tobacco industry interference.’ It focuses on the need to expose and counter the tobacco industry's “brazen and increasingly aggressive attempts” to undermine global tobacco control efforts.

In his message for the Day, the UN chief noted that tobacco takes a “pervasive, heavy toll,” hindering development and worsening poverty: “Tobacco and poverty create a vicious circle since it is the poor who smoke most and bear the brunt of the economic and disease burden of tobacco use.”

He added that money spent on tobacco cannot be used to pay for food, education and health care, and tobacco use is growing fastest in low-income countries that are least equipped to deal with its consequences.

“Tobacco control is essential to achieving our global development goals,” he said. “If we do not step up our efforts to control it, tobacco could kill up to one billion people this century.”

Among the tools the world has at its disposal to fight tobacco use and protect public health is the WHO Framework Convention on Tobacco Control. With 175 parties, it became one of the most rapidly embraced treaties in UN history after it entered into force in 2005.

“I urge all governments and civil society to prevent the tobacco industry from derailing the implementation of the Framework Convention,” the Secretary-General said. “Let us resist the industry’s attacks and pursue our vision of a tobacco-free world.”

According to WHO, more countries are moving to meet their obligations under the Framework Convention, with governments working to create 100 per cent smoke-free, enclosed work and public places; to inform the public of tobacco harms through large and strong pictorial warning on tobacco packages; and to ban tobacco advertising, promotion and sponsorship.

Meanwhile, the tobacco industry is working to undermine the treaty, including taking governments to court, the UN health agency noted. Currently, the Governments of Australia, Norway and Uruguay are battling tobacco industry law suits in their national courts.

WHO’s Director-General, Margaret Chan, called on national leaders to be “extra vigilant” against the attacks by the industry which undermine policies that protect people from the harms of tobacco – one of the leading preventable causes of illness and death worldwide.

“In recent years, multinational tobacco companies have been shamelessly fuelling a series of legal actions against governments that have been at the forefront of the war against tobacco. The industry is now stepping out of the shadows and into court rooms,” she stated in a news release.

“We must now stand together with these governments that have had the courage to do the right thing to protect their citizens,” she added.

In line with the Framework Convention, WHO recommends that countries should limit interactions and disclose all meetings with the tobacco industry; reject partnerships and non-binding agreements with the industry; refuse funds and other support; and reject industry endorsement and participation in youth initiatives, among other steps. 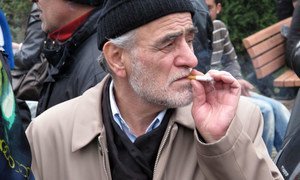 Tobacco use is responsible for five million or 12 per cent of all deaths of adults above the age of 30 globally each year, according to a United Nations report unveiled today, that for the first time provides estimated mortality rates attributable to tobacco for 2004, the year before the international treaty on tobacco came into force.