Bannon/IOM/UNHCR
An aerial view of the Dadaab refugee complex in north-east Kenya.
31 May 2012

The number of displaced persons worldwide will significantly grow over the next ten years due to factors such as conflict, natural disasters and climate change, according to the flagship publication of the United Nations refugee agency, launched today, which stresses that international solidarity is needed to address the issue.

The number of displaced persons worldwide will significantly grow over the next ten years due to factors such as conflict, natural disasters and climate change, according to the flagship publication of the United Nations refugee agency, launched today, which stresses that international solidarity is needed to address the issue.

“The world is creating displacement faster than it is producing solutions, and this means one thing only: More people trapped in exile over many years, unable to return home, to settle locally, or to move elsewhere,” said the UN High Commissioner for Refugees, António Guterres, in relation to the publication.

With its last version published in 2006, the Office of the UN High Commissioner for Refugees’ (UNHCR) The State of the World’s Refugees: In Search of Solidarity provides a fresh, in-depth analysis of the plight of the world's millions of displaced people.

The 2012 publication notes that there are currently 43 million people who have been forced to flee their homes due to a combination of causes. These include conflict, climate change, population growth, urbanization, food insecurity, water scarcity and resource competition. Eighty per cent of the 43 million live in the developing world.

Among the notable changes in global displacement since 2006, the new publication notes the increase in the number of internally displaced persons which now amount to 26 million, more than half of the world’s displaced population. In comparison, around 15-16 million of the displaced persons are refugees and a further million are asylum-seekers.

The State of the World’s Refugees: In Search of Solidarity also describes the challenges that arise when tackling displacement, such as increased threats to the safety of humanitarian workers, and the need to strengthen international cooperation.

It notes how for humanitarian workers a further implication is that helping the displaced is becoming more costly and dangerous, citing countries such as Somalia, Afghanistan, Yemen, or Iraq, where getting help to internally displaced populations means working in environments where access is difficult and conflict or criminality can present deadly risk.

Mr. Guterres stressed that development and resettlement policies for refugees can help them integrate locally, but that political will and a shift in mentality from developed countries is needed for this to occur.

“Pressures on the international protection system are clearly growing. In some industrialized countries in particular we see fortress mentalities that serve only to shift responsibility and compassion elsewhere,” the UN refugee chief said. “In a world where societies are becoming multicultural and multiethnic, it is essential to promote the values of tolerance and to fight the manifestation of xenophobia.” 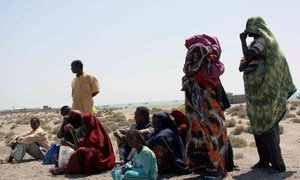 A record number of African migrants fled to Yemen this year, with 43,000 people having reached the Middle Eastern country in only four months, the United Nations refugee agency said today, adding that it is concerned with the rise in insecurity and trafficking in the region.