The head of the United Nations Supervision Mission in Syria (UNSMIS) said today he was “deeply disturbed” after the discovery of 13 bodies last night, just days after UN observers confirmed the killing of more than 100 men, women and children in the village of Houla.

UN observers reported that the 13 bodies were discovered in the area of Assukar, 50 kilometres east of the city of Deir Ez-Zor, in eastern Syria. All the bodies had their hands tied behind their backs and some appear to have been shot in the head from a short distance, according to UNSMIS.

Major-General Robert Mood is “deeply disturbed by this appalling and inexcusable act,” said an UNSMIS statement, adding that “he calls on all parties to exercise restraint and end the cycle violence for the sake of Syria and the Syrian people.”

The massacre in Houla last weekend, which was strongly condemned by the Security Council and a host of UN officials, will be the subject of a special session of the Geneva-based UN Human Rights Council on Friday. This will be the Council's fourth special session on Syria since the crisis in the Middle Eastern country began some 15 months ago.

Following a briefing by video-conference to the Security Council on the latest developments, the Deputy Joint Special Envoy of the UN and the Arab League for the Syrian Crisis, Jean-Marie Guehenno, today told reporters in Geneva that it is important that Member States and the Human Rights Council discuss the situation in Syria.

“Particularly on the Houla massacre, it's important that the truth, the facts be established in a way that nobody can challenge,” Mr. Guehenno said. “That is essential.”

He said he told the Council that the parties need to re-commit to a full cessation of violence: “The Government of Syria needs to take steps to convince, I would say, not only the international community but more importantly the Syrian people that it is ready for a new course.”

This needs to be demonstrated through “concrete and significant” gestures on the cessation of violence, as well as on the issue of detainees and humanitarian access, he added.

“Most importantly, all Syrians must convince themselves that guns cannot be the solution,” Mr. Guehenno noted. “Only political negotiations, as envisioned in the six-point plan, can restore genuine peace and stability to the country.”

The six-point plan – put forward by Joint Special Envoy Kofi Annan in March this year – calls for an end to violence, access for humanitarian agencies to provide relief to those in need, the release of detainees, the start of inclusive political dialogue that takes into account the aspirations of the Syrian people, and unrestricted access to the country for the international media. 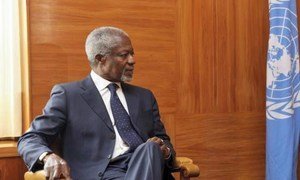