Nearly 5,000 delegates today kicked off a United Nations forum in Geneva focusing on the global jobs crisis and its impact on youth, as well as social protection and rights at work.

“We know that it's time for a policy rethink,” ILO's Director-General, Juan Somavia, told the opening session, noting that some 45-50 million new jobs are needed each year, over the next five years, just to get back to the pre-crisis job situation.

Mr. Somavia highlighted, in particular, the impact of the crisis on the world's young people, noting that “we have been failing our young women and men for some time now.”

“Generally, youth jobless rates are nearly three times that of adults. This is without the many millions worldwide who have become discouraged and stopped looking for work. Furthermore, those who do get a job are likely to be working part time, on temporary contracts, in the informal economy, or precarious work,” he said. “There is little intergenerational solidarity when the adult generation who formulates policy, lets the young generation carry a heavy share of the burden of the crises.”

To involve youth in the ILO conference discussions, the agency held 46 consultations with some 5,000 youth representatives across regions, culminating in the World Youth Forum held last week in Geneva, ahead of the conference.

“This is innovation at work,” said Mr. Somavia. “The several thousands who assembled in these forums and online are the beginnings of an ILO youth network to connect us with the ideas and needs of young women and men.”

Discussions over the next two weeks will also focus on the elaboration of a recommendation on the issue of social protection. Only 20 per cent of the world's population has adequate social security coverage and more than half lack any coverage at all, according to the ILO, which actively promotes policies and provides assistance to countries to help extend adequate levels of social protection to all members of society.

“Establishing social protection floors, respecting the diversity of country situations, is about promoting human dignity,” said Mr. Somavia. “It is a basic contribution to reduce poverty, to empower people and to expand aggregate economic demand. It is a commitment to a decent society, a platform that enables hundreds of millions of women, men and children to progress on a strong footing.”

Also on the agenda is promoting fundamental principles and rights at work, which the Director-General said takes on even greater significance amid a “weak and fragile” global recovery.

The discussions will be “critical” in securing more effective action for their realization, he stated, adding that “greater respect for what are today universally accepted basic 'rules of the game' for the world of work is urgently needed.”

Mr. Somavia, who will step down as ILO chief in September, reminded delegates to keep in mind how much their discussions over the next two weeks make a difference to the world.

“I call on you to visualize the expectations of youth struggling for quality jobs, of people living in poverty for social protection, of workers' demand for fundamental rights,” he said.

The 101st International Labour Conference will also discuss the situation in Myanmar and hear an address by Aung San Suu Kyi, Nobel laureate and Chairperson of the National League for Democracy in Myanmar, on 14 June. 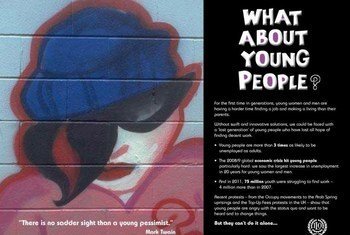 23 May 2012
Addressing a youth employment forum, the head of the United Nations labour agency today warned of a “growing disconnect between people and policy, people and government.”