The United Nations humanitarian office provided more than $427 million last year to assist countries that suffered from emergencies such as drought, floods, and food insecurity, according to a report released today by the Organization.

The United Nations humanitarian office provided more than $427 million last year to assist countries that suffered from emergencies such as drought, floods, and food insecurity, according to a report released today by the Organization.

Financed by voluntary contributions from Member States, non-governmental organizations (NGOs), local governments, the private sector and individual donors, the CERF is a humanitarian fund established by the United Nations to enable more timely and reliable humanitarian assistance to those affected by natural disasters and armed conflicts, helping agencies to pre-position funding for humanitarian action.

Climate-related emergencies due to drought, floods and storms, received more than $149 million from CERF last year, according to a news release issued by the Office for the Coordination of Humanitarian Affairs (OCHA), which helps administer the Fund.

As in previous years, the World Food Programme (WFP) remained CERF's top-funded agency, and was given $127 million – almost 30 per cent of all CERF funds – due to its role providing emergency food aid. The UN Children's Fund (UNICEF) was the second-highest funded agency in 2011, receiving $109 million in support of 130 projects in 38 countries.

The report also highlights stories and programmes from Cambodia, Colombia, Côte d'Ivoire, Guatemala, Kenya, Niger, the Philippines, the Republic of the Congo, Somalia, South Sudan and Turkey, which have received resources from the Fund. 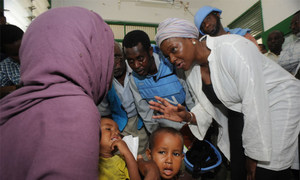 The United Nations humanitarian office announced today the allocation of $104 million to support 13 neglected emergencies around the world.