Highlighting the importance of political commitment and action, the head of the United Nations Office on Drugs and Crime (UNODC), Yury Fedotov, today welcomed efforts by the Afghan Government to combat the menace of trafficking and production of narcotics in the country.

“I welcome the fact that the Government is working hard to counter the narcotics trade in the country, but there is also a need to do much more,” Mr. Fedotov said in a news release. “We must build the necessary political commitment, as well as practical action, to have tangible successes against the criminal networks that traffic in death and misery.”

Mr. Fedotov, who is visiting Afghanistan, discussed plans to boost national and regional efforts against narcotics with President Hamid Karzai today, and stressed that the principle of “shared responsibility” is the most effective way to counter the global problem of opiates originating from the country.

Both the national Government and provincial governors had a crucial role to play, he later added.

Afghanistan produces some 90 per cent of the world’s illicit opiates. UNODC’s Afghan Opium Survey from last year showed a dramatic 133 per cent increase in the farm-gate value of opium compared with 2010, as well as higher prices for the crop and a flourishing drugs trade.

Having launched earlier a new two-year Country Programme for Afghanistan in the capital, Kabul, Mr. Fedotov assured Mr. Karzai that UNODC remained committed to supporting to the country.

The Country Programme represents a concrete step forward towards strengthening the capacity of the Government to fight illicit drugs and crime, paving the way for long-term development, Mr. Fedotov said.

Its focus would primarily be on providing alternative livelihoods to households dependent on illicit crop cultivation; drug demand reduction; and drug-related HIV/AIDS prevention and treatment.

The programme would also contribute to the achievement of the wider objectives of the Regional Programme for Afghanistan and Neighbouring Countries 2011-2014, a strategic framework for UNODC and multilateral partners to respond effectively to drug trafficking and organized crime. 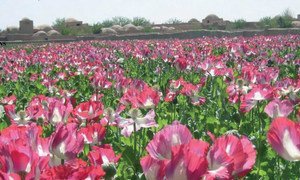 The price of opium in Afghanistan rose dramatically last year, according to a joint survey by the United Nations and the Government that was released today, which also shows that the farm-gate income from the narcotic probably amounted to over $1.4 billion, equivalent to nine per cent of the gross domestic product (GDP).