29 May 2012
Israelis and Palestinians must be willing to take the much-needed steps to capitalize on recent positive trends that hold the potential for progress in the peace process, a top United Nations envoy told the Security Council today.

“This is important because, while the potential for progress exists, the situation remains fragile and uncertain,” the Special Coordinator for the Middle East Peace Process, Robert Serry, told the 15-member body.

In the monthly briefing to the Council on the situation in the Middle East, Mr. Serry said that the past month has been characterized by several “challenging” events with the potential to destabilize the situation on the ground, including the hunger strike by more than 1,500 Palestinian prisoners in Israeli custody which was resolved in mid-May.

“Yet each has been overcome for now, and we are possibly moving in a more positive direction,” he stated.

Mr. Serry spoke of the “quiet direct engagement” between the parties in the context of the exchange of letters between the Israeli Government and the Palestinian Authority, in which they outlined their respective requirements for direct talks to continue.

The envoy noted that Palestinian reconciliation is a “fundamental” aspect of peace.

“The outcome of recent reconciliation efforts, on which I have reported, is still uncertain, but in the end there can be no two-State solution without Palestinian unity being restored consistent with this goal,” he said.

He also reiterated Secretary-General Ban Ki-moon’s hope that Prime Minister Benjamin Netanyahu’s expanded coalition provides an opportunity for Israel to embark on a meaningful renewal of the peace process.

Addressing the impact of the “Arab Awakening,” Mr. Serry said he disagreed with those arguing that the significant change and uncertainty in the region brought about by the uprisings across North Africa and the Middle East means this is not the time for progress.

“On the contrary, the search for a lasting peace that ends the Arab-Israeli conflict and resolves all claims is in my view more urgent than ever,” he said. “If the parties do not grasp the current opportunity, they should realize the implication is not merely slowing progress toward a two-State solution.”

“Instead, we could be moving down the path toward a one-State reality, which would also move us further away from regional peace in the spirit of the Arab Peace Initiative,” he added. 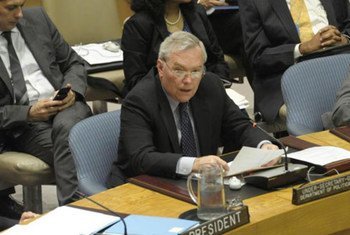