29 May 2012
In a meeting with the Syrian President, Bashar Al-Assad, the Joint Special Envoy of the United Nations and the League of Arab States on the Syrian Crisis, Kofi Annan, today stressed that a peace plan, put forward in March, cannot succeed without “bold steps” to stop the violence and release detainees.

“We are at a tipping point,” Mr. Annan told reporters at a press briefing in the Syrian capital of Damascus, during which he spoke about the meeting with the President. “The Syrian people do not want the future to be one of bloodshed and division, yet the killings continue and the abuses are still with us today.”

Mr. Annan said he had conveyed to Mr. Assad, in frank terms, “the grave concern of the international community about the violence in Syria,” and, in particular, the events in Houla over the weekend.

The UN estimates that more than 9,000 people, mostly civilians, have been killed in Syria and tens of thousands displaced since the uprising against President Assad began some 15 months ago. Mr. Annan arrived in Damascus on Monday, just days after a massacre of over 100 men, women and children in the village of Houla, which he described as “an appalling crime.”

The Special Envoy noted that Mr. Assad also condemned the killings in Houla and that the Syrian Government is organizing its own investigations to find those responsible.

However, he stressed that the six-point plan – which he put forward in March this year – is not being implemented as it should be. The plan calls for an end to violence, access for humanitarian agencies to provide relief to those in need, the release of detainees, the start of inclusive political dialogue that takes into account the aspirations of the Syrian people, and unrestricted access to the country for the international media.

“I appealed to [President Assad] for bold steps now – not tomorrow, now – to create momentum for the implementation of the plan. This means that the Government, and all Government-backed militias, could stop all military operations and show maximum restraint,” Mr. Annan said.

He added, “I also appeal to the armed opposition to cease acts of violence, and I also ask all States with influence to impress upon the Government and all parties the need for a cessation of violence in all its forms – including the continuing human rights abuses.”

In addition, Mr. Annan said he had stressed to Mr. Assad that the implementation of the six-point plan was not open-ended.

“We did not agree on a specific timetable, but I made it clear that it is not an open ended process and that time is coming, sooner rather than later, when the international community will need to make an assessment as to how things are going and what further actions or activities may be necessary,” he said.

Asked about the decision by various countries to expel Syrian diplomats from their territories, Mr. Annan said this was a sovereign decision made by each State, and the moves reflected the grave concern the international community has regarding the massacre in Houla. 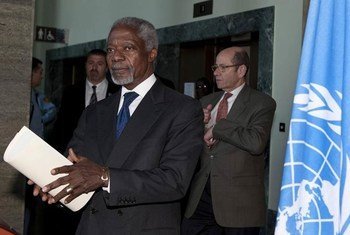 28 May 2012
The Joint Special Envoy of the United Nations and the League of Arab States arrived in the Syrian capital on Monday at what he called a “critical” moment in the crisis, just days after the massacre of men, women and children that has sparked widespread condemnation.