UN Photo/N. Kaddoura
An UNSMIS delegation convoy drives througn a neighbourhood of Homs in early May.

26 May 2012
Top United Nations officials on Saturday strongly condemned the killing of over 90 civilians, including 32 children, and the wounding of hundreds more in a village near Homs, and stressed that those responsible must be held accountable.

Observers from the UN Supervision Mission in Syria (UNSMIS) confirmed the killing after having viewed the bodies in the village of Houla, where they also confirmed from an examination of ordnance that artillery and tank shells were fired at a residential neighbourhood.

“This appalling and brutal crime involving indiscriminate and disproportionate use of force is a flagrant violation of international law and of the commitments of the Syrian Government to cease the use of heavy weapons in population centres and violence in all its forms,” said a statement issued on behalf of Secretary-General Ban Ki-moon and the Joint Special Envoy of the UN and the League of Arab States for Syria, Kofi Annan.

“Those responsible for perpetrating this crime must be held to account,” it added.

General Robert Mood, the head of UNSMIS, issued a statement in which he said that UN observers went earlier today to Houla, where they counted more than 32 children under the age of 10 and over 60 adults killed.

“The circumstances that led to these tragic killings are still unclear,” the statement noted, while adding that whoever is responsible should be held accountable.

“This indiscriminate and disproportionate use of force is unacceptable and unforgiveable. The killing of innocent children and civilians needs to stop,” it stated.

All three officials demand that the Syrian Government immediately cease the use of heavy weapons in population centres, and called on all parties to halt violence in all its forms. Mr. Annan is contacting the Syrian authorities to convey the expectations of the international community, and he will also do so during his forthcoming visit to Syria.

The violence prompted the Security Council to establish UNSMIS, with up to 300 unarmed military observers, to monitor the cessation of violence and support the full implementation of the six-point plan put forward by Mr. Annan.

That plan calls for an end to violence, access for humanitarian agencies to provide relief to those in need, the release of detainees, the start of inclusive political dialogue that takes into account the aspirations of the Syrian people, and unrestricted access to the country for the international media. 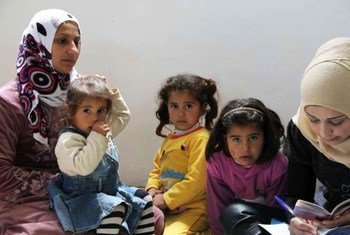 24 May 2012
Gross human rights violations continue unabated in Syria, amid increasing militarization of the strife there, despite an earlier agreement by parties to the conflict to halt hostilities, the United Nations independent panel probing abuses in the country said in an update released today.