UNHCR/F.Juez
Members of a Syrian family register as refugees in northern Lebanon.
24 May 2012

Most of the serious violations were committed by the Syrian army and security services as part of military or search operations in locations thought to host defectors or armed people, and those seen as supporters of anti-government armed groups, the Independent International Commission of Inquiry on Syria said in an update on gross violations of humans rights and casualty figures resulting from the conflict to the Geneva-based UN Human Rights Council.

“The army employed the wide range of military means, including heavy shelling of civilian areas,” the panel said in the report, which focuses on incidents that occurred since March, and is based on 214 interviews conducted during two investigative missions in March and April, as well as other interviews conducted recently in Geneva.

It noted that the Syrian Government has so far not provided access for the Commission to carry out its investigations inside the Middle Eastern country.

A series of explosions have taken a heavy toll on human life in the capital, Damascus, and the cities of Idlib and Aleppo and other places, the Commission reported, condemning the indiscriminate nature of the attacks.

It voiced grave concern over the displacement of civilians, both within Syria and across borders, as well as widespread pillaging and burning of homes. The tightly controlled security environment had also resulted in restrictions on the fundamental freedoms of movement, speech and association, and the systematic denial, in some areas, of the basic needs of human life such as food, water and health care.

From its 214 interviews, the Commission said it was able to confirm 207 deaths resulting from the violence since March, adding that it had also received from the Government lists of victims from the ranks of police, military and security forces.

“According to these lists, a total of 478 police officers and 2,091 individuals from the military and security forces were killed between 29 March 2011 and 20 March 2012. Without access to the Syrian Arab Republic, the Commission is not in a position to confirm these figures,” it said in the report.

Children were frequently among those killed and injured during attacks on protests and the bombardment of towns and villages by Government forces, the Commission said, noting that it had recorded an incident in which several people were allegedly executed in Taftanaz in April when the village was raided by Government forces.

“There were five people under 18 among the deceased,” the Commisison said. “Additionally, specific reports of children being killed by snipers arose in two separate villages in Idlib in January and March.”

The UN estimates that more than 9,000 people, mostly civilians, have been killed in Syria and tens of thousands displaced since the uprising against the administration led by President Bashar al-Assad some 14 months ago. The violence prompted the Security Council to authorize the establishment of UN Supervision Mission in Syria (UNSMIS) with up to 300 unarmed military observers, for an initial period of 90 days.

Spread out in various locations, the observers are tasked with monitoring the cessation of violence and supporting the full implementation of the six-point plan put forward by the Joint Special Envoy of the UN and the League of Arab States, Kofi Annan.

Mr. Annan’s six-point plan calls for an end to violence, access for humanitarian agencies to provide relief to those in need, the release of detainees, the start of inclusive political dialogue that takes into account the aspirations of the Syrian people, and unrestricted access to the country for the international media. 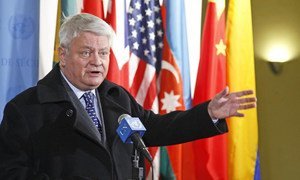 The head of UN peacekeeping, Hervé Ladsous, today met with Syrian government and opposition group representatives in the city of Homs, during a visit to assess progress made on the ground by UN military observers.