The United Nation Special Coordinator for Lebanon, Derek Plumbly, today welcomed efforts by the country’s Prime Minister to enhance stability following recent tensions, stressing that the UN supports all measures to maintain security and the well-being of the Lebanese people.

“I know there is public concern about the manifestations of insecurity that have been seen over the past two weeks,” Mr. Plumbly told reporters in Beirut after meeting with Lebanese Prime Minister Najib Mikati. “But I believe they have also alerted all of us to the need to work together to sustain calm and stability in Lebanon at this time of turbulence in the region.”

Mr. Plumbly had on Monday voiced concern over recent violent incidents that led to loss of life in Lebanon. According to media reports, the violence was related to the unrest in neighbouring Syria, with clashes between sympathizers and opponents of the different parties to the conflict there.

A protest movement – similar to those across the Middle East and North Africa – has claimed over 9,000 lives in Syria, mostly civilians, and displaced tens of thousands since it began in March 2011; and has led to the deployment of UN observers.

“I told the Prime Minister that the United Nations supports all steps aimed at safeguarding Lebanon’s stability and security and the wellbeing of its citizens,” Mr. Plumbly said in his comments.

“I relayed the same message to President [Michel] Sleiman when I met him yesterday,” he added. “In this context, we warmly welcome the President’s determination to revive dialogue in Lebanon at a time when such dialogue and communication is obviously a necessity.”

The Special Coordinator also voiced concern, on behalf of the United Nations, over the abduction of 11 Lebanese pilgrims in Syria earlier this week, and expressed the hope that they will be returned to their families as soon as possible. 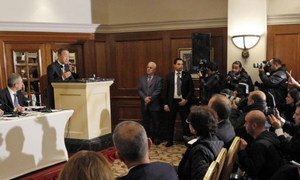 The United Nations will maintain its “strong and unwavering” commitment to Lebanon, Secretary-General Ban Ki-moon pledged today as he began an official visit to the country.