The United Nations agency tasked with safeguarding the world’s cultural heritage and the Government of Mali have defined measures to safeguard World Heritage Properties in the country’s north – including the fabled city of Timbuktu – following reports of wilful damage to mausoleums at the site.

The measures were agreed on during a visit to the capital, Bamako, last week, by the Assistant Director-General for Africa of the UN Educational, Scientific and Cultural Organization (UNESCO), Lalla Aicha Ben Barka, during which she met with senior government officials, including Prime Minister Cheick Modibo Diarra, who also serves as a UNESCO Goodwill Ambassador.

Fighting between Government troops and Tuareg rebels that resumed in January in northern Mali has forced tens of thousands of people to leave their homes; in addition, Mali is also dealing with the impact of a coup by rebel Malian soldiers who took control of the country earlier this year.

In April, following reports that rebels had over-run and looted centres containing thousands of ancient books and documents in Timbuktu, UNESCO’s Director-General, Irina Bokova, voiced concern about the risks posed by the fighting, and appealed to all relevant authorities to be on the alert against any attempt to traffic items stolen from these centres.

The agreed-on steps to preserve the country’s cultural heritage include Mali finalizing its accession to the 1999 Second Protocol to the Hague Convention of 1954 for the Protection of Cultural Property in the Event of Armed Conflict, as well requesting the inscription of the two World Heritage sites of Timbuktu and the Tomb of Askia on the List of World Heritage in Danger by the World Heritage Committee during its upcoming session, which starts next month.

Mali will also draft a report on priority measures for its World Heritage sites, in line with international heritage conventions, and it will request technical and financial assistance from UNESCO and the international community.

For its part, UNESCO will present the World Heritage Committee with a detailed report on the state of conservation of World Heritage sites in Mali, notably Timbuktu and the Tomb of Askia, during its next meeting. It will help the Government of Mali in reinforcing protection for all of its cultural properties, and raise awareness in neighbouring countries and among the international community of the situation to help fight the illicit trade in cultural artefacts.

UNESCO will also work closely with UN agencies engaged in humanitarian action in Mali to ensure the safeguarding of the country’s cultural property. 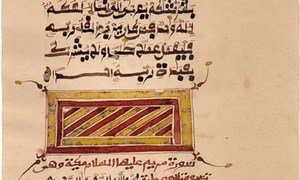 Reports that rebels have over-run and looted centres containing thousands of ancient books and documents in Mali’s historic city of Timbuktu has led the head of the United Nations Educational, Scientific and Cultural Organization (UNESCO) to appeal to all relevant authorities to be on the alert against any attempt to traffic items stolen from these centres.