Appointed to new term, WHO head recommits to goal of better health for most vulnerable

WHO/Pierre Albouy
WHO Director-General Margaret Chan makes her acceptance speech after the World Health Assembly appointed her to a second term.
23 May 2012

Appointed to a new term at the helm of the United Nations World Health Organization (WHO), the agency’s head today underlined her commitment to improving the health of women and the people of Africa, as she pursues other priorities, such as enhancing health systems and combating non-communicable diseases.

“My overarching commitment to improve the health of women and the people of Africa will continue, sharpened by recent experiences,” said Dr. Margaret Chan, in her acceptance speech after the World Health Assembly, WHO’s decision-making body, appointed her to a second five-year terms as the agency’s Director-General. The Assembly is attended by delegations from all WHO Member States.

“I will be fully supporting Every Woman, Every Child as well as a growing number of initiatives to improve health in Africa. As part of my commitment to women, I will be giving more emphasis to the prevention of domestic violence,” said Ms. Chan. Every Woman, Every Child is an initiative of Secretary-General Ban Ki-moon in support of efforts to achieve the health-related Millennium Development Goals (MDGs).

Ms. Chan identified her other priorities as mental health and disabilities; health security; health development for poverty reduction; access to medical products, and improving WHO performance through reform.

She also underlined the importance of universal health coverage, describing it as the single most powerful concept in public health.

She cited the following as some of the problems faced by health systems: soaring costs amid poor access to essential medicines, especially affordable generic products; an emphasis on cures that does not take prevention into consideration; costly private care for the privileged few, but poor services for everyone else; grossly inadequate numbers of staff; weak or inappropriate information systems; and weak regulatory control and schemes for financing that are punitive for the poor.

Ms. Chan, a citizen of China, was first appointed WHO Director-General in November 2006. Her second term will begin on 1 July. 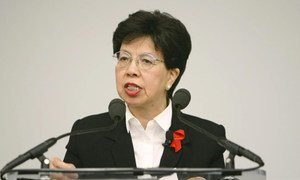 With the health gap between rich and poor at its widest level in recent history, the United Nations today opened a three-day forum in Brazil to tackle the social, economic and environmental root causes of health inequities.