SOYDA/Abdiqani
Somalis fleeing the insurgent-held town of Afgooye for Mogadishu.

23 May 2012
As military forces make their way into Somalia’s Afgooye corridor, the United Nations top humanitarian official for the east African country today reiterated his call for efforts to be made to minimize the impact of conflict on civilians.

“At this stage, we have no reports of significant movements of people from the corridor,” the UN Resident and Humanitarian Coordinator for Somalia, Mark Bowden, said in a statement. “However, I remain concerned that an escalation of hostilities or a prolonged operation could lead to displacement, further straining the capacity of settlements and host communities in Mogadishu or driving people away from the life-saving help they require.”

Mr. Bowden also reiterated the need to allow full humanitarian access to all people in need in the Afgooye corridor, located outside of the Somali capital of Mogadishu.

According to a press release of the UN-backed African Union Mission in Somalia (AMISOM), issued on Wednesday, Afgooye has for a long time been a stronghold of Al Shabaab insurgents and is a strategic junction for routes to the north, west and south of Somalia. In the so-called Operation Free Shabelle, AMISOM said that its forces, and those of the Somali National Army, have made significant progress in the last 24 hours towards Afgooye town, with the aim of bringing security to the 400,000 people located inside the Afgooye corridor.

“While remaining strictly neutral and independent of political and military processes, humanitarian actors are coordinating preparations to ensure immediate assistance is available to civilians most affected by military activities in the corridor,” Mr. Bowden added in his statement.

The UN Office for the Coordination of Humanitarian Affairs has previously said that an upsurge in conflict in the corridor will most likely lead to a further displacement of internally displaced people (IDPs) from the corridor into Mogadishu and surrounding areas. The number of IDPs in the capital is currently estimated at 184,000.

After decades of warfare, Somalia has been undergoing a peace and national reconciliation process, with the country’s Transitional Federal Institutions currently implementing a roadmap, devised in September last year, that spells out priority measures to be carried out before the current transitional governing arrangements end on 20 August.

Until last year, most of Mogadishu was, for several years, riven by a fluid frontline dividing the two sides – fighters belonging to the Al Shabaab movement and troops belonging to Somalia’s Transitional Federal Government, with the latter supported by AMISOM’s peacekeeping forces.

Since the Al Shabaab withdrawal from the capital’s central parts in August last year, the frontlines were pushed back to the city’s surrounding area. However, the use of roadside bombs, grenades and suicide bombers is still a regular occurrence, and outbreaks of fighting still take place.

UNESCO calls for protection of Libya’s Old City of Ghadamès 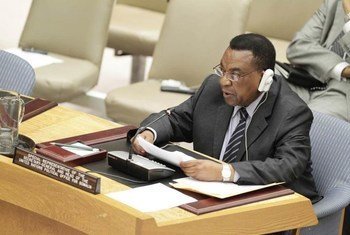 15 May 2012
Somalia is entering its “most critical stage” as the end of its transitional governing period approaches in August, a United Nations envoy said today, calling for the international community to boost their efforts to help the east African country through its peace and national reconciliation process.