MONUSCO/Sylvain Liechti
Head of the UN Stabilization Mission in the Democratic Republic of the Congo Roger Meece.
22 May 2012

“What we are facing right now had its genesis in early April with an action initiated by Bosco Ntaganda for a mutiny of troops ostensibly integrated in to the FARDC [the Forces Armées de la République Démocratique du Congo – the DRC’s armed forces] although many, including himself, in fact have never fully accepted central Government authority,” the head of the UN Stabilization Mission in DRC (MONUSCO), Roger Meece, told reporters in New York via video-link.

“His [Mr. Ntaganda] actions at the time I think were probably provoked by fear that the net was closing in on him for an arrest or other action against him,” Mr. Meece added.

The Prosecutor of the International Criminal Court (ICC), Luis Moreno-Ocampo, said last week that he is seeking new charges against Mr. Ntaganda, related to war crimes and crimes against humanity charges. The ICC had issued an arrest warrant for Mr. Ntaganda in 2006, for crimes allegedly committed against civilians in the DRC’s Ituri region between 2002 and 2003.

Mr. Meece said that MONUSCO peacekeepers are actively engaged in several actions, including the protection of vulnerable areas, such as the town of Sake, which Mr. Ntaganda’s forces made an attempt to seize.

“We are working to protect civilians throughout the region where there is fighting going on,” he said, adding that most of the fighting between government troops and Mr. Ntaganda’s mutinous forces is concentrated in an area adjacent to the town of Bunagana, near the DRC’s border with Uganda.

“They are primarily occupying positions in high ground and high hill positions to south of Bunagana, around the Virunga park,” said Mr. Meece. “There is a substantially larger FARDC force that has basically encircled this area putting military pressure on them.”

MONUSCO forces have so far not been engaged in any frontline offensive action, and the Mission is staying in close contact with the FARDC and DRC authorities, as well as taking coordinated measures to help protect the town of Bunagana.

The Special Representative added that the fighting had caused “significant” displacement of civilians, some of whom have crossed the border into Ugandan and Rwanda, and MONUSCO is working to facilitate humanitarian access to the areas of conflict.

The Office of the UN High Commissioner for Refugees (UNHCR) said today that Ugandan authorities had reported that an additional 13,000 to 15,000 refugees from the DRC had entered the country over the past few days. Between 6,000 and 7,000 people arrived earlier.

A UNHCR spokesperson told reporters in Geneva that the agency has started transporting people from the border to the Nyakabande transit centre, further inside Uganda. He added that in Rwanda, smaller numbers of Congolese continue to cross the border and make their way to the overstretched Nkamira transit camp, which currently hosts more than 9,000 people. 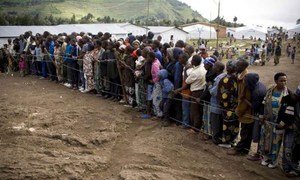 The top United Nations refugee official today voiced his alarm at new inflows of refugees into Rwanda and Uganda, fleeing fighting in eastern Democratic Republic of the Congo (DRC).