During the meeting, on the sidelines of the NATO Summit in the United States city of Chicago, Mr. Ban congratulated Mr. Hollande on assuming office following presidential elections earlier this month – he said he was sure that relations between France and the United Nations would be further strengthened.

On Syria, the Secretary-General said that a pivotal moment had been reached in the search for a peaceful settlement to the crisis and that he remained extremely troubled about the risk of an all-out civil. He also voiced concern over the outbreak of violence in neighbouring Lebanon, which has been linked to the situation in Syria.

A protest movement – similar to those across the Middle East and North Africa – has claimed over 9,000 lives in Syria, mostly civilians, and displaced tens of thousands since it began in March 2011.

In his meeting with President Hollande, the Secretary-General also expressed gratitude for the contribution of French peacekeepers serving with the UN Interim Force in Lebanon (UNIFIL).

Mr. Ban also met today with the President of Pakistan, Asif Ali Zardari. Their discussions focussed on Afghanistan, with the UN chief emphasizing the importance of regional cooperation and Pakistan's role in that, and encouraging Mr. Zardari to help as much as possible with Afghanistan's reconciliation process.

In another bilateral meeting today, Mr. Ban discussed the situations in Afghanistan, Syria and Libya with the United Kingdom’s Secretary of State for Defence, Philip Hammond.

Separately, the Secretary-General met with the Prime Minister of the Netherlands, Mark Rutte, with whom he also exchanged views on Syria, Rio+20, and global development agenda beyond the 2015 deadline for achieving the Millennium Development Goals (MDGs).

Yesterday, Mr. Ban had a tête-à-tête with the Turkish President Abdullah Gül, with their discussions focusing on Syria, Cyprus, Afghanistan and Somalia.

The Secretary-General thanked Mr. Gül for Turkey’s generous support of Syrian refugees, and, on the matter of Cyprus, he voiced concern over the lack of progress in talks aimed at the reunification of the Mediterranean island State. 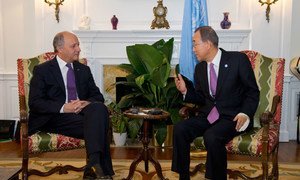