21 May 2012
The United Nations Security Council and Secretary-General Ban Ki-moon today strongly condemned a terrorist attack in the city of Sana’a, the Yemeni capital, which reportedly killed at least 96 soldiers and wounded more than 300 people.

“This criminal act cannot be justified by any cause,” Mr. Ban’s spokesperson said in a statement. “Its perpetrators must be held accountable.”

Yemen is currently undergoing a transition process after a popular rising erupted in the country last year, similar to the protests in other countries in the Middle East and North Africa. According to media reports, a suicide attacker disguised as a Yemeni soldier blew himself up today in the midst of a rehearsal for a military parade.

In addition to condemning the attack, both the Council and the UN chief expressed their sympathy and condolences to the victims and their families, as well as to the people and Government of Yemen.

Mr. Ban’s spokesperson said the Secretary-General “calls on all in Yemen to reject the use of violence in all its forms and manifestations, and expects them play a full and constructive role in implementing Yemen’s political Transition Agreement, in accordance with Security Council resolution 2014.”

Adopted by the Council in October last year, resolution 2014 condemned human rights violations and the excessive use of force in Yemen, and called on all sides to quickly implement a regional plan for an orderly transition of power. It also voiced concern over the risk of terrorist attacks in parts of the country, and noted the Council’s determination to deal with the threat in accordance with the UN Charter and international law.

“The members of the Security Council reaffirmed that terrorism in all its forms and manifestations constitutes one of the most serious threats to international peace and security, and that any acts of terrorism are criminal and unjustifiable, regardless of their motivation, wherever, whenever and by whomsoever committed,” Ambassador Agshin Mehdiyev of Azerbaijan, in his capacity as Council President for the month of May, said in a press statement.

“The members of the Security Council reminded States that they must ensure that measures taken to combat terrorism comply with all their obligations under international law, in particular international human rights, refugee and humanitarian law,” Amb. Mehdiyev added.

In February, Yemen held elections, including a presidential poll, which resulted in the victory of Abdrabuh Mansour Hadi Mansour. In March, the Security Council called on Yemen to remain committed to its transition process and noted that the country had entered a second phase of transition which should focus, among other things, on restructuring its security forces and establishing an inclusive national dialogue. 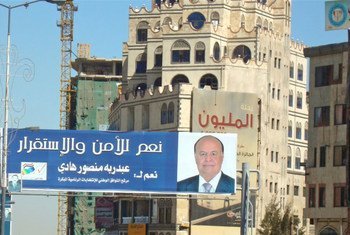 29 March 2012
The Security Council today voiced concern at the recent deterioration in cooperation among political actors in Yemen and called on them to remain committed to the country’s transition.