21 May 2012
Secretary-General Ban Ki-moon has congratulated the people of Timor-Leste on the 10th anniversary of their country’s restoration of independence, hailing the “impressive advances” over the past decade, and noting that national institutions are now able to safeguard stability and democracy.

“Parliament serves as a dynamic forum for political debate, thanks to the constructive participation of both governing and opposition parties,” said Mr. Ban in a message delivered on his behalf, during independence celebrations in the capital, Dili, yesterday.

“Successive governments have taken concrete steps to improve the daily lives of citizens and lay the groundwork for development. The judiciary has made important gains in upholding the rule of law,” Mr. Ban added.

Mr. Ban noted that April’s presidential poll had shown that the national police and the armed forces are increasingly able to perform their respective tasks, and that a country that once was a recipient of peacekeeping assistance is contributing personnel to United Nations efforts to maintain peace and security around the world.

“The people of Timor-Leste should be proud of these many achievements. They have shown unswerving resolve in overcoming great challenges,” the UN chief said. “The nation’s leaders have shown wisdom and responsibility in guiding the country through testing times.”

Mr. Ban voiced his appreciation for the service to the country of outgoing president, José Ramos-Horta, noting that he had guided Timor-Leste through many difficult moments, promoting peace, reconciliation and national unity.

He also noted that while the UN Integrated Mission in Timor-Leste (UNMIT) continues to prepare for its anticipated departure at the end of this year, the United Nations will remain steadfast in its support for Timor-Leste for many years to come.

“Peacekeepers may leave, but the United Nations remains your close partner in building a better future for all the country’s people,” the Secretary-General said. 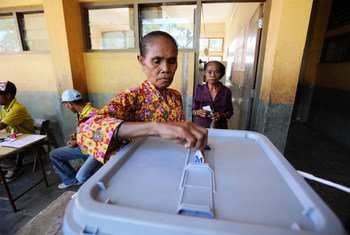 26 April 2012
The Security Council has welcomed the second round of presidential elections in Timor-Leste calling it “an important milestone for the consolidation of peace and stability” in the country, as well as a reflection of the commitment of its people to democracy and the rule of law.