The United Nations independent expert on torture today said he was encouraged by recent legal changes in Tajikistan, including the introduction of a new provision defining torture and specifying penalties, but noted that mistreatment of suspects remains common.

The UN Special Rapporteur on torture, Juan E. Méndez, called for “sustained effort and commitment from the highest levels of authority and a clear pledge of ‘zero tolerance’ for torture in Tajikistan.

“If there is no recognition that there is a problem with mistreatment, whether systematic or not, mistreatment is not likely to go away,” Mr. Méndez said in a news release at the end of his nine-day mission to Tajikistan, his first to the country. “On the contrary, it is likely to increase as soon as attention shifts to other matters.”

In his preliminary findings, the human rights expert noted that “pressure on detainees, mostly as a means to extract confessions is practiced in Tajikistan in various forms, including threats, beatings and sometimes by applying electric shock.”

He said an awareness-raising campaign on torture, initiated by the Tajik authorities, is a step in the right direction, but noted that it was difficult at this stage to assess the impact of the effort on citizens.

Mr. Méndez also voiced concern over the relatively light penalty of a five-year jail term for a first offender convicted of committing the crime of torture. Such a penalty did not appear to be line with the obligation to treat torture as a serious crime, he said, adding that, “A relatively low penalty does not offer a strong disincentive to commit torture.”

He underscored that “confessions extracted by violence remain the main investigatory tool of law enforcement and prosecutorial bodies,” although the Code of Criminal Procedure in Tajikistan has incorporated a rule that is line with the Convention against Torture, which states that confessions obtained through torture are not admissible in criminal proceeding against a defendant.

“I am unable to say whether the practice is less prevalent or systematic in recent times. I am, however, persuaded that it happens often enough and in a wide variety of settings that it will take a very concerted effort to abolish it or to reduce it sharply,” he added.

Denmark a leader on combating torture, but UN expert has some concerns 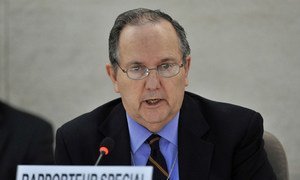 Commissions of inquiry into torture and other forms of ill-treatment are effective instruments to fight impunity, but do not replace a country’s legal obligations to prosecute human rights violations, a United Nations independent expert stressed today.