18 May 2012
A record number of African migrants fled to Yemen this year, with 43,000 people having reached the Middle Eastern country in only four months, the United Nations refugee agency said today, adding that it is concerned with the rise in insecurity and trafficking in the region.

“All those who had decided to make the crossing exposed themselves to extreme risks and dangers at every stage of their journey,” a spokesperson for the Office of the UN High Commissioner for Refugees (UNHCR), Andrej Mahecic, told reporters in Geneva. “They faced shocking levels of abuse and violence by smugglers, as well as arbitrary arrests and detention, closed borders and forced returns, trafficking, lack of access to shelter, water, food or medical assistance.”

During the same period last year, some 30,000 people had made the journey. However, Mr. Mahecic said the increase in the overall number of new arrivals reflects the growing Ethiopian population that is moving due to drought and the dire economic situation in the country.

“Those who make it often arrive exhausted, dehydrated, malnourished and in a state of shock,” Mr. Mahecic said.

According to UNHCR, while all Somali arrivals were automatically recognized as refugees in Yemen and had access to documentation and freedom of movement, this has not been the case for Ethiopian nationals.

“The situation was profoundly different and more difficult for Ethiopian nationals,” Mr. Mahecic said. “Few Ethiopians decided to seek asylum upon arrival to Yemen – to avoid detention and deportation, they attempted to evade contact with the authorities.”

Many Ethiopians were then picked up on the beaches by criminal groups involved in the trafficking and smuggling of people to other Gulf States, and there have been reports of consistent violence and abuse as many Ethiopian migrants fell victims to robberies, abuse and extortion.

“For Ethiopian nationals who did not fall under the protection of the Refugee Convention, there was virtually no protection space,” Mr. Mahecic said. “They were extremely vulnerable and often became easy prey for traffickers and smugglers.”

In addition to the influx of migrants, Yemen is also coping with a significant internal displacement. There are currently 470,000 people who are registered as internally displaced, and UNHCR estimates that there are an additional 95,000 people who are still unregistered.

Some 103,000 people arrived in Yemen last year, which is also a record number since UNHCR began compiling statistics in 2006. This year, UNHCR has appealed for $60 million to address the humanitarian needs of the nearly 220,000 refugees and almost half a million internally displaced people in Yemen. So far the agency has received a third of the funds. 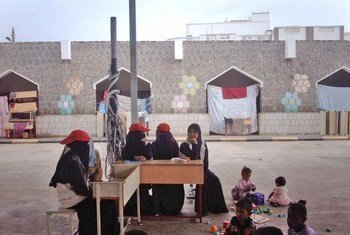 17 April 2012
In the wake of a two-day visit, a senior United Nations official today raised concern about Yemen’s humanitarian situation, underscoring the need for strong commitment from the international community to support the millions of people there facing a worsening humanitarian crisis.