Latvian authorities must ensure that vulnerable groups are not disproportionately affected by austerity measures and other economic policies, a United Nations independent expert said today.

“Any measures to promote economic growth and macroeconomic stabilisation should be directed to ensuring that the benefits of growth accrue to the people, especially the poorest and most vulnerable groups,” the UN Special Rapporteur on the effects of foreign debt on human rights, Cephas Lumina, said in a news release, at the end of a five-day visit to assess the impact of Latvia’s external debt burden on its human rights situation and development.

Mr. Lumina expressed strong concern over the current socio-economic problems in the country, such as high unemployment, growing poverty levels, high emigration rates among the economically active population, insufficient support to families with a number of children, and increasing trafficking rates. He called on the Government to adopt a human rights-based approach to policy-making to ensure that public policies are consistent with economic, social and cultural rights.

In addition to meeting with Government officials, multilateral agencies and representatives of civil society during his visit, Mr. Lumina also explored the impact of the global financial crisis and the austerity measures under the European Union (EU) and International Monetary Fund stabilisation programme on the country’s capacity to ensure the enjoyment of these rights.

While he commended the Government for putting a social safety net in place, with the support of the EU and the World Bank, he called for the adoption of a new national human rights action plan to provide an overarching strategy for the protection of rights in Latvia in light of the country’s economic difficulties.

Independent experts, or special rapporteurs, are appointed by the Geneva-based Human Rights Council to examine and report back on a country situation or a specific human rights theme. The positions are honorary and the experts are not United Nations staff, nor are they paid for their work. Mr Lumina is expected to submit a full report on his visit to the Council in June.

♦ Receive daily updates directly in your inbox - Subscribe here to a topic.
♦ Download the UN News app for your iOS or Android devices.
economic crisis 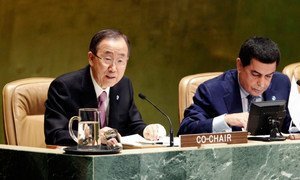 United Nations senior officials today stressed the importance of establishing a new paradigm for growth that ensures social inclusiveness, job opportunities for all, and more accountability from the financial sector to tackle the ongoing global economic crisis.