Flickr/See-ming Lee
An activist waves a rainbow flag, an international symbol for the rights of gay, lesbian, bisexual and transgender people.

17 May 2012
Marking International Day against Homophobia and Transphobia, senior United Nations officials today drew attention to laws around the world which discriminate against lesbian, gay, bisexual and transgender (LGBT) people, and called for equality and the repeal of such laws.

“When I raise these issues, some complain that I’m pushing for ‘new rights’ or ‘special rights’ for lesbian, gay, bisexual and transgender people. But there is nothing new or special about the right to life and security of person, the right to freedom from discrimination,” said the UN High Commissioner for Human Rights, Navi Pillay, in a statement.

“These and other rights are universal… enshrined in international law but denied to many of our fellow human beings simply because of their sexual orientation or gender identity,” she added.

While not an officially observed UN day, the majority of which have been established by the UN General Assembly or designated by UN specialized agencies, the International Day against Homophobia, observed on 17 May, has become an important day for millions of people around the world to pause and remember the victims of homophobic violence and discrimination, and to make the case for genuine equality for LGBT people.

According to the Office of High Commissioner for Human Rights (OHCHR), close to 80 countries, territories and areas still have laws that criminalize same-sex relations between consenting adults.

“We cannot let these abuses stand. We know what needs to be done,” Ms. Pillay said. “States must repeal discriminatory laws and ban discriminatory practices: punish violence and hatred… not love.”

In connection with the Day, a UN spokesperson said Secretary-General Ban Ki-moon has called on States to tackle violence against LGBT people, decriminalize consensual same-sex relationships, ban discrimination and educate the public – and he “supports the High Commissioner’s message: ‘We are all human and we all deserve the same rights.’”

The spokesperson said Mr. Ban is distressed by the fact that LGBT people are discriminated against in the labour market, in schools and in healthcare, and are even abused and disowned by their own families.

“He is outraged that they are singled out for physical attack, even murder,” the spokesperson said. “And he has called for a repeal of laws, now on the books in 76 countries, that criminalize loving relationships between people of the same sex.”

In March, the UN chief told the Geneva-based Human Rights Council that he had not grown up talking about these issues, but had learned to speak up “because lives are at stake.” In 2010, he lauded the “courageous” decision by President Bingu wa Mutharika of Malawi to pardon a gay couple who had been sentenced to 14 years in prison, and, more recently, he stressed the need to ensure the rights of LGBT people during a visit to Zambia.

The head of UNAIDS, the lead United Nations agency dealing with the global HIV/AIDS response, said the laws are serious barriers to an effective AIDS response and are driving LGBT people underground where they cannot access life-saving services.

“A society’s value should not be based on money or power. It must be measured by the way it values people, regardless of their sexual orientation or social status. A prosperous society is one that ensures inclusiveness and respects all people,” said UNAIDS’ Executive Director, Michel Sidibé. “To our gay, lesbian, bisexual and transgender friends, UNAIDS stands with you.”

Mr. Sidibé’s comments were echoed by Helen Clark, the Administrator of the UN Development Programme (UNDP), which supports initiatives that promote understanding of the negative impact of homophobia and transphobia, and reduce human rights violations.

“As we commemorate IDAHO [International Day against Homophobia and Transphobia], be assured that UNDP will continue to work to empower all individuals to fulfil their potential,” Ms. Clark said in a statement. “Only by including and empowering all can we truly have resilient nations and sustainable human development.”

She added that UNDP experts have been working with governments and civil society organizations around the globe to monitor rights violations against LGBT people, document their impact on access to HIV prevention, counselling, treatment and care, and support rights-based responses for LGBT. In addition, over the last eighteen months, the Global Commission on HIV and the Law, convened by UNDP, has examined evidence on the relationship between legal environments, human rights, and HIV for men who have sex with men and transgender people. 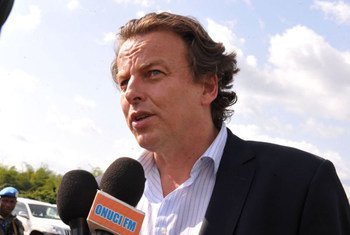 26 February 2012
The head of the United Nations peacekeeping mission in Côte d'Ivoire today voiced his satisfaction with the conduct of the legislative by-elections in the country, saying the polls were carried out in an atmosphere of calm.