A senior United Nations relief official today voiced deep concern over the plight of Palestinians affected by Israel’s occupation, including those displaced after their homes were demolished, and called for the scrapping of policies and practices that deny them the right to support themselves.

“I am extremely concerned about the humanitarian impact of demolitions and displacement on Palestinian families,” the Assistant Secretary-General for Humanitarian Affairs, Catherine Bragg, said in a news release issued at the end of her three-day visit to the occupied Palestinian territory (oPt).

“Such actions cause great human suffering, run counter to international law and must be brought to a halt,” added Ms. Bragg, who also serves as the Deputy Emergency Relief Coordinator.

She visited several vulnerable Palestinian communities and witnessed first-hand the situation on the ground and the humanitarian impact of the occupation on freedom of movement and access to basic social services.

At Susiya, in the southern West Bank, and neighbourhoods on the outskirts of Jerusalem, Ms. Bragg met vulnerable Palestinian communities who live in fear of their homes being demolished or of being forcibly displaced.

“Many Palestinian children cannot exercise their right to safe education because their schools are threatened with demolition. Children should not have to worry whether their school will still be standing tomorrow,” she said after visiting a primary school under a demolition order in Susiya.

In Hebron, Ms. Bragg visited the restricted H2 area of the city and met families who regularly face settler violence. She noted that it is imperative that the Israeli authorities take all necessary measures to protect civilians from such violence, including addressing the culture of impunity.

“The continued suffering and loss of dignity is unacceptable. Palestinian communities could support themselves if they had the freedom to do so,” she said. “Urgent action is required to change current policies and practices on the ground and ensure the protection of the civilian population.”

Ms. Bragg had hoped to meet Israeli officials to discuss ways of improving access to and protection of civilian communities. Requested for meetings were, however, not confirmed. 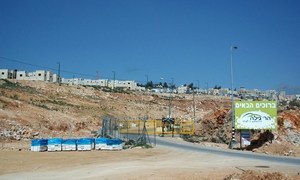 Secretary-General Ban Ki-moon today said he was “deeply troubled” by Israel’s decision to formally approve three outposts in the West Bank, describing the action as illegal under international law.