Sub-Saharan Africa cannot sustain its present economic growth unless it eliminates the hunger that is affecting almost a quarter of its people, according to a new United Nations report launched today, which calls for new approaches to empower local communities to ensure food security in the region.

“Impressive GDP growth rates in Africa have not translated into the elimination of hunger and malnutrition,” said the Administrator of the UN Development Programme (UNDP), Helen Clark, at the launch of the report today in Nairobi. “Inclusive growth and people-centred approaches to food security are needed.”

With more than one in four of its 856 million people undernourished, Sub-Saharan Africa remains the world’s most food-insecure region. There are more than 15 million people at risk of malnutrition in its Sahel region alone – stretching from the Atlantic Ocean to the Red Sea – and an equal number in the Horn of Africa remain vulnerable after last year’s food crisis in Djibouti, Ethiopia, Kenya, and Somalia.

UNDP’s Africa Human Development Report 2012: Towards a Food Secure Future stresses that action on agriculture alone will not be enough to eliminate hunger, and new approaches will have to include the improvement of health services and agricultural infrastructure, as well as giving a greater voice to the poor through strengthened local governments and civil society groups.

“Building a food-secure future for all Africans will only be achieved if efforts span the entire development agenda,” Miss Clark said at the report’s launch, which was attended by Kenya’s President Mwai Kibaki. The report is the first in UNDP’s Human Development Report series which focuses specifically on Africa.

It underlines that food insecurity should not be prevalent in a continent that has been experiencing high rates of economic growth and improvements in life expectancy and schooling in recent years.

“It is a harsh paradox that in a world of food surpluses, hunger and malnutrition remain pervasive on a continent with ample agricultural endowments,” said the Director of UNDP’s Africa Bureau, Tegegnework Gettu, in a news release.

While acknowledging that there are no quick fixes, the report emphasizes that food security can be achieved through immediate action in four critical areas. These include increasing agricultural productivity of smallholder farmers; boosting nutrition by expanding access to health services, education and clean water; implementing social programmes that protect farmers against natural disasters and conflict; and giving women and marginalized groups access to land and technology.

“The impressive economic growth which much of the continent has been recording must now be accompanied by decisive action to improve food security and nutrition,” Miss Clark said. “Growth divorced from advances in human development does little for people, and without advances in human development, countries cannot meet their full potential either.” 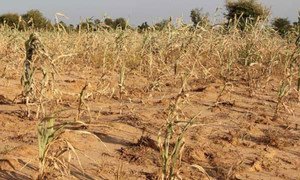 A major funding gap is threatening efforts to boost food security and development in the Sahel region of West Africa and in the Horn of Africa in the east, a senior United Nations official warned today.