The Security Council has strongly condemned today’s attack on the United Nations mission in the Democratic Republic of the Congo (DRC) in which at least 11 Pakistani peacekeepers were seriously wounded.

Seven peacekeepers sustained bullet wounds and several others were injured after being hit with stones when a group of some 1,000 people surrounded their base in the Bunyiakiri area of South Kivu province, according to the UN Organization Stabilization Mission in the DRC (MONUSCO).

Council members condemned the attack “in the strongest terms,” Ambassador Agshin Mehdivev of Azerbaijan, which holds the rotating Council presidency for May, said in a statement read out to the press after closed-door talks.

“They encouraged the Government of the Democratic Republic of the Congo to ensure that the perpetrators of the attacks are brought to justice swiftly,” he added.

Earlier today, UN spokesperson Martin Nesirky told reporters at the world body’s Headquarters in New York that the people outside the base were reportedly protesting against attacks by the Forces Démocratiques pour la Libération du Rwanda – a Rwandan rebel group – in the area.

“The Mission says elements of the Mayi-Mayi group, Rai Mutomboki, an armed self-defence group, may have been part of the protest and may have fired on the peacekeepers,” he said.

MONUSCO is monitoring the situation and has sent reinforcements to the area, which is now reportedly calm but tense.

Since 1999, the UN peacekeeping operation in the DRC – with some 19,000 uniformed personnel currently on the ground – has overseen the vast country’s emergence from years of civil war and factional chaos, culminating most notably in 2006 with the first democratic elections in over four decades.

However, fighting has continued sporadically in the east, where the bulk of UN forces are deployed. 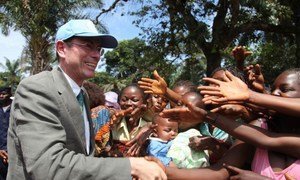