The United Nations envoy for children and armed conflict today urged the Ugandan Government bring to justice a senior commander of the brutal Lord’s Resistance Army (LRA), who was captured over the weekend, saying he is responsible for some of the most egregious abuses against children.

Ugandan authorities announced on Saturday that the country’s army had captured Caesar Acellam Otto, one of LRA’s top military leaders in the Central African Republic (CAR).

“I am encouraged by the capture of one of the worst perpetrators of child rights violations, and hope that the Ugandan authorities would not apply amnesty but instead, bring him to justice,” said the Special Representative of the Secretary-General for Children and Armed Conflict, Radhika Coomaraswamy, in a news release.

“The arrest and subsequent prosecution of Acellam would send a strong message to the LRA leadership that they will be held accountable for their actions,” she added.

Mr. Acellam was seized along with his wife and child, as well as a 12-year-old girl from CAR, whose status in his family remains unclear. The family is currently in Ugandan custody in neighbouring South Sudan, while the 12-year old girl is in CAR.

Ms. Coomaraswamy stressed that children who are separated from the LRA should be excluded from criminal prosecution because of their status as minors who were forced into the group against their will.

She also encouraged the Ugandan army to hand over the children separated from the LRA to civilian child protection institutions, in line with local procedures and international standards.

The LRA, a notoriously violent armed group believed to be made up of between 200 and 500 fighters is currently active in CAR, the Democratic Republic of the Congo and South Sudan, where it has raided villages and subjected civilians to acts of brutality and plunder.

The group, which originated in northern Uganda in the late 1980s, has over the years abducted children and forced them to commit atrocities against other people and used kidnapped girls as sex slaves. It has also a history of killing and mutilating its victims. 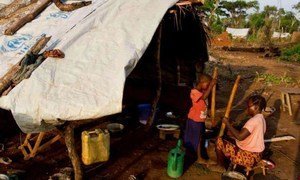 The United Nations-backed military initiative launched recently by the African Union against the terror group known as the Lord’s Resistance Army (LRA) has kept its members constantly on the move and unable to settle down in any one place for long, according to a UN envoy.