The Mexican Government should implement a new law to protect journalists and human rights defenders, a group of United Nations and regional experts stressed today, adding that authorities must prioritize breaking the cycle of impunity which has led to repeated killings in recent years.

The group of four experts from the UN and the Inter-American Commission on Human Rights, called on the Government to move ahead with the promulgation of the ‘Law for the Protection of Human Rights Defenders and Journalists,’ which seeks to “guarantee and safeguard the life, integrity and security of human rights defenders and journalists by creating a mechanism with the authority to implement measures to protect those at risk, as well as at preventing such risks from arising in the future.”

“We have to break the cycle of impunity in Mexico, which is becoming an increasingly violent place for journalists,” said UN Special Rapporteur on the promotion and protection of the right to freedom of opinion and expression, Frank La Rue. “The recent killing of four press workers in Veracruz underscores the dire need for concrete steps to be taken to guarantee the safety of journalists and put an end to impunity.”

The bill, which has been approved by both chambers of the federal congress, was drafted in consultation with civil society organizations, and the Office of the High Commissioner for Human Rights in Mexico provided technical advice throughout the drafting process.

The four experts, who also include the Special Rapporteur for freedom of expression of the Inter-American Commission on Human Rights, Catalina Botero, and Santiago A. Canton, the Commission’s Executive Secretary on Human Rights on behalf of the Rapporteurship of Human Rights Defenders, commended the Mexican congress for approving the bill, noting that it would provide momentum and sustainability to existing protection frameworks.

The human rights experts also praised the process which allowed multiple parties to play an important role in the drafting of the bill, and called for the same participatory approach throughout the implementation process. They emphasized the urgency of providing effective protection to those at risk and ensuring that human rights violations against journalists and human rights defenders do not go unpunished. 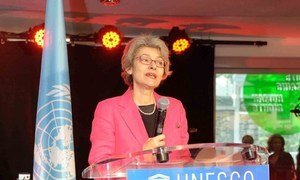 The head of the United Nations agency tasked with defending press freedom today voiced alarm and anger over the murders of three Mexican journalists in the state of Veracruz in less than a week.