12 May 2012
A senior United Nations relief official today urged the international community to build on the effective delivery of aid that helped roll back last year's famine in Somalia, noting that about 2.5 million people in the Horn of Africa country remain in need of humanitarian support.

“Famine conditions are no longer present in Somalia, largely due to the effective delivery of aid and the good harvest at the beginning of the year, but the humanitarian situation remains critical,” said Catherine Bragg, the Assistant Secretary-General for Humanitarian Affairs, at the end of a five-day visit to Somalia and Kenya.

“We must build on the fragile gains. The number of people who need food aid decreased by 1.5 million, but 2.5 million people are still in crisis and that is a very large number,” said Ms. Bragg, who is also the UN Deputy Emergency Relief Coordinator.

Focus should now be on on helping people regain their livelihoods, which is crucial to building resilience to future droughts and other shocks.

“The local and international aid workers collaborating in Somalia have proven they can make a difference,” she noted. “We are strengthening coordination with key actors, including Turkey and the Organization of the Islamic Conference, which is vital to ensure that all of our resources are used efficiently for the benefit of the Somali people.”

In neighbouring Kenya, Ms. Bragg commended the Government for its commitment to strengthening the resilience of communities in drought-affected areas.

“I have just returned from meeting families in Isiolo in north-central Kenya who were affected by the 2011 drought crisis,” said ASG Bragg. “I am very impressed by the ongoing national initiatives to build the communities' resilience to recurring drought, but we are not out of the woods yet.”

Last year's drought made some 3.8 million Kenyans dependent on food aid and an estimated 2.2 million people remain in need of assistance, including 250,000 who are in humanitarian crisis.

On the last day of the mission, Ms. Bragg visited a demonstration site for improving agricultural practices for residents of arid areas. “I am impressed by the community's longer-term vision, dealing not only with immediate food needs but also planning their children's future by selling part of the produce to send them to school,” she said. 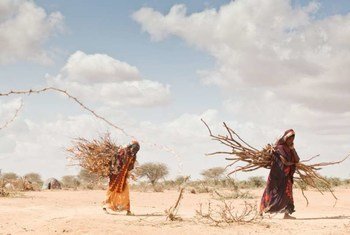 29 February 2012
The main rainy season in the Greater Horn of Africa is likely to receive “near normal to below normal rainfall” over much of the region between March and May, a United Nations-backed climate forecasting forum reported today.