UN mission in Afghanistan condemns attacks on schools by insurgents

UNAMA/F. Waezi
Afghan girls in class at the Rukhsana School in Kabul.

UN mission in Afghanistan condemns attacks on schools by insurgents

12 May 2012
The United Nations mission in Afghanistan today voiced serious concern over reported attacks on schools and education officials by anti-government groups in recent weeks, saying the raids were a violation of children's right to education.

“It is imperative that all parties to the conflict respect the civilian status of schools and work to protect and promote the rights of children, particularly girls, to education,” the UN Assistance Mission in Afghanistan (UNAMA) said in a statement.

The mission said it had over the past year monitored unacceptable levels of violence by anti-government elements directed against schools, education institutions, their staff and students.

In Khogyani district of Nangahar province on 8 May, anti-government elements set fire to a girls' secondary school in Wazir village, destroying two school buildings and equipment.

Insurgents have also conducted a campaign of intimidation against community leaders and staff at the school to force its closure. “UNAMA condemns these attacks that aim to limit access to education and to intimidate civilians,” said the statement.

The mission said the attacks and acts of intimidation demonstrate a disregard for the protection of civilians, especially children, and of civilian institutions.

“They are a serious violation of international humanitarian law and of the right to education,” said UNAMA in its statement. It urged the anti-government elements to stop the “heinous attacks” against children and education officials.

“UNAMA calls for the respect of international humanitarian law and for the right to education for all Afghans.”

The mission also called on the Afghan Government and the international forces to ensure that effective security measures are in place to protect schools, students and teachers.

“UNAMA strongly urges anti-government elements to uphold and demonstrate the commitments to education they have made in public statements.”

In a related development, UNAMA and two UN agencies called on the Afghan Government and NATO to ensure that the protection of women and girls is a central component of the security arrangements that will emerge from the 2014 transition when NATO will hand over full security responsibilities to Afghan authorities.

In a joint press release issued ahead of the NATO Summit in the United States city of Chicago on 20-21 May, UNAMA, UN Population Fund (UNFPA) and UN Women urged NATO and the Afghan Government to fulfill Security Council resolution 1325, which requires that all parties to take special measures to protect women and girls in armed conflict. The resolution also stresses the critical role women can play in all efforts to promote peace and security.

“Now is the time to deal with the longer-term security and protection needs of Afghan women who have long borne the brunt of the war in Afghanistan,” said Ján Kubiš, the Special Representative of the Secretary-General and head of UNAMA.

“Women's specific protection needs should be central to plans being made as the Afghan national army and police prepare to take an increasing lead in security operations and the NATO–ISAF mission evolves from combat operations to training and assistance to Afghan forces.”

Women's rights groups and Afghan civil society have stressed that gains made in the past decade for millions of Afghan women in securing equal constitutional rights, political participation, and access to health and education must not be compromised in any transition agreements between NATO, international partners and the Afghan Government.

“Protection of women during transition and in post-transition is critical as women are more vulnerable to insecurity and any breakdown in local rule of law,” said Georgette Gagnon, the Director of Human Rights in UNAMA. “Transition should prioritize an increasing civilian policing role for the Afghan National Police over its paramilitary functions, including expansion of human rights protection with a particular focus on women's rights and rule of law.”

The UN bodies stressed that protection for women during and after the transition requires that the Afghan National Police be fully resourced, trained, equipped and sensitized to affectively address cases of violence against women and girls.

“It is important that the international and national community puts every effort into breaking the silence and ensuring that the voices of women and girls are heard and that the necessary services are put in place to support those women and girls,” said Laurent Zessler, the UNFPA Representative in Afghanistan.

Ingibjorg Solrun Gisladottir, the UN Women Country Director for Afghanistan, said: “Security is paramount for improving girls and women's freedom of movement and access to education and health services. Women understand the drivers of insecurity in their communities and it is crucial to include Afghan women's groups in decisions impacting on their security during and after the transition of security from NATO-ISAF to Afghan forces.” 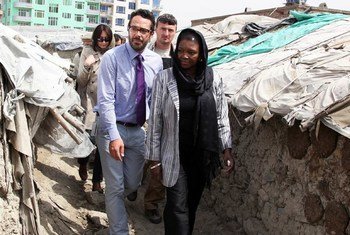 11 May 2012
The top United Nations humanitarian official today reaffirmed the Organization’s continued support for Afghanistan and stressed the need for increased investment in programmes that expand sources of livelihood and improve basic education, health care and the rule of law.