11 May 2012
Despite some predictions in the wake of the United States troop withdrawal from Iraq, the Middle Eastern country is making progress on its path to stability, according to the United Nations envoy there.

“Everybody at the beginning of the year was a little bit cautious, observing the situation, and there were many who said that ‘now the real civil war starts,’” said the Secretary-General’s Special Representative and head of the UN Assistance Mission for Iraq (UNAMI), Martin Kobler.

“Nothing of the kind happened,” he said in an interview. “All our figures indicate that there is no deterioration in the security situation of the country.

“However, every civilian casualty is one civilian casualty too many,” Mr. Kobler added, noting that there were 600 people who died on the streets of the capital, Baghdad, in the first few months of this year. “Even if this might be less than at the same period last year, it is still too much. But the apprehensions at the beginning of this year did not materialize.”

The envoy drew attention to the need to tackle outstanding issues, including the holding of a national dialogue and resolving disputed internal boundaries, both of which are areas that the UN is focusing on along with the Government.

In his most recent report to the Security Council concerning Iraq, Secretary-General Ban Ki-moon warned that if outstanding issues to achieve national reconciliation are not addressed in a meaningful way, through an inclusive dialogue, they could lead to renewed political tensions and adversely impact the security situation.

The national dialogue, noted Mr. Kobler, has to be an inclusive and transparent process.

“Everybody has to participate… a boycott is not a solution because you exclude yourself if you boycott from a national consensus on the very urgent problems of the country,” he said.

He also touched on the situation regarding the Iraqi settlement formerly known as Camp Ashraf, whose residents are members of a group known as the People’s Mojahedeen of Iran. The camp has been one of the main issues dealt with by UNAMI for more than 18 months.

In line with a memorandum of understanding signed in December 2011 by the UN and the Iraqi Government to resolve the situation, some two-thirds of the residents, or 2,000 people, were re-located to a temporary transit location known as Camp Liberty, where a process to determine refugee status is being carried out by the Office of the UN High Commissioner for Refugees (UNHCR).

“The main challenge will be to find resettlement countries – third countries where those people who are then recognized as refugees can re-locate,” said Mr. Kobler, who urged Member States to open their borders for these people. 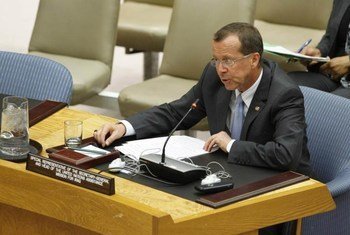 10 April 2012
The top United Nations envoy to Iraq today underscored the need for the country’s leaders to work together to resolve outstanding issues, including the holding of a national dialogue, disputed internal boundaries and the human rights situation.