A United Nations-backed committee today endorsed a set of far-reaching global guidelines to help governments protect the rights of people, especially the poor, to own or access land, forests and fisheries.

“Giving poor and vulnerable people secure and equitable rights to access land and other natural resources is a key condition in the fight against hunger and poverty,” said the Director-General of the UN Food and Agriculture Organization (FAO), José Graziano da Silva.

“It is a historic breakthrough that countries have agreed on these first-ever global land tenure guidelines,” he added. “We now have a shared vision. It’s a starting point that will help improve the often dire situation of the hungry and poor.”

The new Voluntary Guidelines on the Responsible Governance of Tenure of Land, Fisheries and Forests in the Context of National Food Security was adopted by the Committee on World Food Security (CFS) – the leading global platform for discussions on food security issues – in Rome earlier on Friday.

Among the issues dealt with in the guidelines is the so-called ‘land-grabbing’ phenomenon, according to a news release issued by FAO. It recommends that safeguards be put in place to protect tenure rights of local people from risks that could arise from large-scale land acquisitions, and also to protect human rights, livelihoods, food security and the environment.

The guidelines also address a wide range of other issues such as recognition and protection of legitimate tenure rights, even under informal systems; best practices for registration and transfer of tenure rights; making sure that tenure administrative systems are accessible and affordable; managing expropriations and restitution of land to people who were forcibly evicted in the past; and the rights of indigenous communities.

“Some of the issues addressed by the Voluntary Guidelines go back centuries even. The fact that these guidelines tackle those entrenched issues as well as newer concerns is what makes them so significant,” said Mr. Graziano da Silva.

He added that FAO stands ready to provide support and assistance to countries in adapting and implementing the guidelines. The agency will now develop a series of technical handbooks designed to help countries adapt the guidelines to their local contexts and carry them out, as well as provide targeted technical assistance to governments.

The guidelines are based on a consultation process started by FAO in 2009 and then finalized through CFS-led intergovernmental negotiations that included the participation of government officials, civil society organizations, private sector representatives, international organizations and academics. 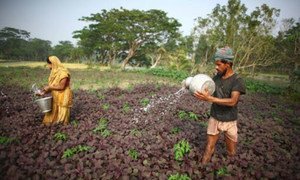 Ninety-six countries, along with non-governmental, private, and civil society organizations, have reached a consensus on a set of global guidelines on responsible access to and ownership of land, fisheries and forests during talks convened by the United Nations Food and Agriculture Organization (FAO) in Rome.