WFP/Daouda Guirou
A field of withered crops in Mali’s Kayes region.
10 May 2012

A major funding gap is threatening efforts to boost food security and development in the Sahel region of West Africa and in the Horn of Africa in the east, a senior United Nations official warned today.

“In the Horn of Africa we are losing the window of opportunity to build on our recent achievements – which helped to overcome the famine declared last year in Somalia – increasing the resilience of families facing drought,” said the Director-General of the Food and Agriculture Organization (FAO), José Graziano da Silva, in remarks to the Foro Nueva Economía international economic forum in Madrid.

With one in every seven people in the world suffering from chronic hunger and malnutrition, “fighting hunger is a challenge too great for FAO or any government to overcome alone,” Mr. Graziano da Silva added. “It must involve civil society, private enterprise, international agencies, and the governments of developing and developed countries. For this reason we have opened the doors of FAO to new allies with whom we share a common set of principles.”

Earlier this week, the heads of the World Food Programme (WFP) and the UN High Commissioner for Refugees (UNHCR) wrapped up a visit to Niger by issuing a call to the international community to meet its commitments, both financial as well as political, to help those in need.

“The window of opportunity to save lives is narrowing by the day,” WFP Executive Director Ertharin Cousin and High Commissioner for Refugees António Guterres said in a joint statement. “The time to act is now.”

They added that despite early response from donors, the needs remain great, the hunger season has started early and plans to help those at risk, whether local communities or refugees, are still “significantly underfunded.” 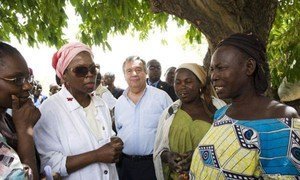 Wrapping up a four-day visit to the epicentre of the food crisis sweeping the Sahel region of West Africa, two top United Nations humanitarian officials today urged the world to meet its commitments, both financial as well as political, to help those in need.