The National Inter-Agency CITES Enforcement Collaboration Group (NICECG) of China was awarded a Certificate of Commendation by the Secretary-General of the Convention on International Trade in Endangered Species of Wild Fauna and Flora (CITES), John E. Scanlon.

Over 100,000 enforcement officers were mobilized in the offensive against wildlife crime carried out by the group, which was set up in December 2011 to facilitate the collection and exchange of intelligence, enhance capacity building, and coordinate joint enforcement activities, according to a news release issued by CITES.

During the Forest Police Operation, more than 700 cases of illegal wildlife trade were uncovered; 7,155 illegal wildlife stalls and shops as well as 628 illegal online wildlife shops were shut down; 520 websites believed to sell illegal wildlife were closely monitored; and 13 wildlife-related criminal networks were dismantled, among other achievements.

Meanwhile, the Customs Authorities Operation led to the arrest of 13 suspects and the seizure of large quantities of ivory, red sandal wood, yew timber and antelope horns.

“The sheer scale, extent of coordination, and level of success of these intelligence-driven operations exemplify the coordinated enforcement effort that is required at the national and sub-national levels to combat wildlife crime successfully,” said Mr. Scanlon, who presented the Certificate of Commendation at a CITES meeting in the Chinese city of Guangzhou.

CITES, which is administered by the UN Environment Programme (UNEP), noted that the Chinese organization serves as “a model at the provincial level,” with five CITES enforcement inter-agency groups being set up. 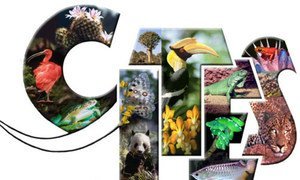 Animal experts from 50 countries meeting at a United Nations-backed conference today expressed concern about the sustainability of current levels of trade in snake skins used in luxury products and another 20 animal species used in biomedical research, the food industry or as pets.